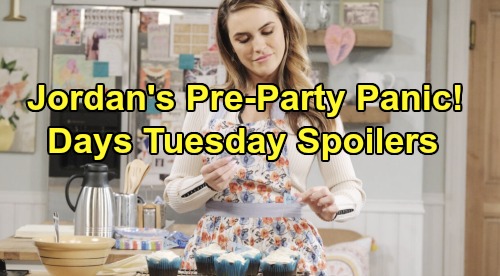 Days of Our Lives (DOOL) spoilers for Tuesday, October 22, tease that Dr. Wilhelm Rolf (William Utay) will track down Jennifer Horton (Melissa Reeves) and demand his flash drive. Thanks to Kayla Johnson (Mary Beth Evans), Dr. Rolf knows it ended up in Jennifer’s hands. Since Jenn didn’t mention it when they ran into each other, Dr. Rolf will naturally suspect Jennifer’s been busy trying to find out what’s on it.

DOOL fans can expect Dr. Rolf to deliver a fierce threat. He’ll insist Jennifer had better give that flash drive back or there’ll be consequences! In the meantime, Days spoilers say Kayla and Roman Brady (Josh Taylor) will ponder a mystery. They’ll be puzzled over Hope Brady’s (Kristian Alfonso) strange behavior, so they’ll discuss what the problem might be.

Of course, Roman and Kayla won’t suspect that Hope’s turning into Princess Gina, but that’s exactly what’s happening. These bizarre episodes of hers are becoming more and more frequent, so it won’t be long until the transformation is complete. Across town, Days of Our Lives spoilers say Ciara Brady (Victoria Konefal) will make a stunning discovery. She’ll realize Stefano DiMera’s (Joseph Mascolo) portrait is missing, so that’ll certainly leave her perplexed.

Ciara will likely question Ben Weston (Robert Scott Wilson) about this vanishing portrait, but he won’t have a clue. They might speculate about repairs or cleaning, but they won’t know Hope slipped in and stole it right out of the mansion. Ben will also make a special gift for David Ridgeway on Tuesday. Days spoilers say he’ll build a toy box, so Ciara will gush over the gesture and insist David’s going to love it.

Ben will be optimistic about this birthday party serving as a turning point. He’ll be eager to get his relationship with Jordan Ridgeway (Chrishell Hartley) back on track and start bonding with his nephew. Ciara will be just as hopeful, so they’ll enjoy some couple time and get steamy as usual. They’ll have no idea what Jordan’s cooking up at Rafe Hernandez’s (Galen Gering) place.

Days of Our Lives spoilers say Jordan will whip up some cupcakes for the birthday bash. She’ll make sure to carefully label Ciara’s – and there’s a good reason why. Jordan will inject some poison into the one meant for Ben’s girlfriend and count on it to kill her. She’ll think this will take care of Ciara once and for all.

Unfortunately, Arianna Horton (Harper and Sydnee Udell) will end up giving Ciara’s cupcake to David. That’ll create some pre-party panic for Jordan, but she’ll snatch the dessert away from her son and avert disaster. However, there are more disasters to come in this terrible scheme! We’ll give you updates as other Days news comes in. Stay tuned to DOOL and don’t forget to check CDL often for the latest Days of Our Lives spoilers, updates and news.