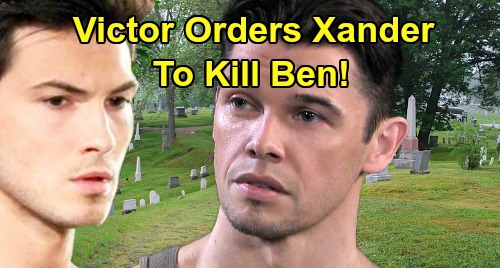 Days of Our Lives (DOOL) spoilers tease that Victor Kiriakis (John Aniston) will soon have a big request of Xander Kiriakis (Paul Telfer). As DOOL viewers know, Xander has been doing his best to redeem himself in the eyes of the people he cares about. Xander is genuinely smitten with Sarah Horton (Linsey Godfrey) and he is trying to be a better man in order to woo her. Of course, Sarah only has eyes for Eric Brady (Greg Vaughan) right now, but Xander still has hope for the future.

Plus, Xander has developed a unique friendship with Maggie Kiriakis (Suzanne Rogers), which is something he’d like to preserve. Xander’s relationship with his mother was troubled, and in a way, he sees Maggie as a beloved mother-figure. Despite the things he’s done in the past, he’s really trying to get his life on track and have legitimate dealings going forward, so he can be a true part of the Kiriakis family.

In the coming days, Xander will have the unpleasant task of explaining his involvement in Holly Jonas’ (Harlow and Scarlett Mallory) abduction and presumed death. As DOOL viewers know, Xander worked directly for Kristen DiMera (Stacy Haiduk) and was the person who kidnapped Holly from the DiMera mansion. Then, with the help of Ted Laurent (Gilles Marini), Xander faked Holly’s death and subsequently traumatized a lot of people in Salem.

Well, the big revelation that Holly is alive and Xander knew it won’t go over so well with Sarah and Maggie. Xander will have an uphill battle explaining himself to these two, and he’ll probably try to explain by maintaining that Kristen posed a danger to him as well if he didn’t do what she wanted. That probably won’t be a satisfying explanation to Sarah and Maggie, but Xander will keep trying to forge a good relationship with them.

Unfortunately, it seems that Victor will have other plans for Xander. He’ll want to pull Xander right back into some bad dealings that Xander probably won’t be too happy about. According to DOOL spoilers, Victor will have an important job for Xander, and it will involve cold-blooded murder! We can’t forget that Victor has a nefarious past, and he’s ordered more than a few deaths over the years.

Well, Victor will apparently decide that he doesn’t want his granddaughter Ciara Brady (Victoria Konefal) with the likes of former serial killer Ben Weston (Robert Scott Wilson), and he’ll decide that he can kill two birds with one stone. He’ll plan to simultaneously test Xander’s loyalty to the family and get rid of the threat to his granddaughter by ordering Xander to kill Ben!

Now, this is going to put Xander in a real bind. We know that Xander had a real moral problem with killing Ted and Kate DiMera (Lauren Koslow) after Kristen ordered him to kill them while they were holed up in the DiMera secret room. Turns out he just couldn’t do it. And chances are, he’s not going to want to just haul off and kill Ben, either, and he’ll probably balk at Victor’s order. But Victor might just offer Xander a place in the Kiriakis family if he does the deed.

So, Xander’s going to have a difficult situation to negotiate. There will probably be a strong pull toward getting Victor’s acceptance and proving his loyalty to the family. But he won’t want to do it by killing someone, and he’ll really want to move on from his old ways and killing Ben isn’t going to make that happen! DOOL viewers will have to tune in to see how Xander handles this delicate situation, because something’s got to give!

How do you think Xander will get out of murdering Ben? Stay tuned to DOOL and don’t forget to check CDL often for the latest Days of Our Lives spoilers, updates, and news.