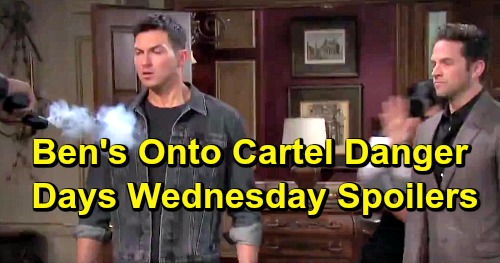 Days of Our Lives (DOOL) spoilers for Wednesday, April 17, tease that Will Horton’s (Chandler Massey) biopsy will move forward. He just had a frightening seizure, but Dr. Rex Brady (Kyle Lowder) will make sure Will’s stable for his procedure. It’s important to find out what Will’s up against, so he’ll have his surgery while Sonny Kiriakis (Freddie Smith) and Dr. Marlena Evans (Deidre Hall) anxiously await updates.

Marlena will be terrified for her grandson, but she’ll probably realize she needs to be strong for Sonny. “Doc” always has to step up and be there for Salemites who could use support. Days of Our Lives spoilers say both Sonny and Marlena will try to hold out hope. They’ll count on good news later, but they’ll understand this could really go either way.

Over with Chloe Lane (Nadia Bjorlin), she’ll finally catch on. DOOL fans know Gabi Hernandez (Camila Banus) has been keeping Stefan DiMera (Brandon Barash) busy for a while. That allowed Brady Black (Eric Martsolf) to have a “chance meeting” with Chloe and Holly Jonas (Harlow and Scarlett Mallory) in the park.

However, it won’t be long until Chloe puts the clues together and determines that Brady orchestrated all this. She’ll figure out that Brady is still scheming despite his promise to butt out, so she’ll naturally hit the roof. Days spoilers state that Brady will get an earful for deceiving Chloe. She’ll rip into him and insist that enough is enough, so stay tuned for Chloe’s fierce wrath.

Across town, Ben Weston (Robert Scott Wilson) will get a shock. He’ll learn that the drug cartel is making a move, so Gabi and Ciara Brady (Victoria Konefal) are about to land in the wrong place at the wrong time. They’ll be held hostage soon, which means they’ll need a brave rescue team.

Other Days of Our Lives spoilers say Eric Brady (Greg Vaughan) will open up to Dr. Sarah Horton (Linsey Godfrey). He’ll confess that he has some regrets about his relationship with Nicole Walker (Arianne Zucker), so he’ll explain and get some comfort on Wednesday. Sarah’s heart will go out to Eric, which should allow them to grow even closer.

This is all building to Nicole’s big comeback next week! We’ll keep you posted as other Days details emerge. Stick with DOOL and don’t forget to check CDL often for the latest Days of Our Lives spoilers, updates and news.