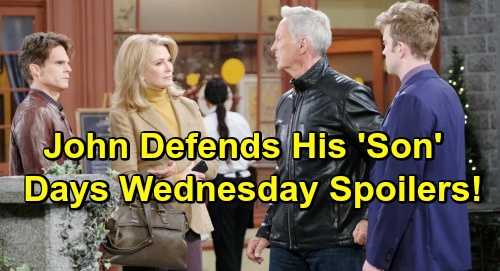 Days of Our Lives (DOOL) spoilers Wednesday, February 27, tease that Sarah Horton (Linsey Godfrey) will have a hot dream about Eric Brady (Greg Vaughan). She’ll be surprised by just how steamy it is, but she’s in for an even bigger surprise thanks to Eric’s brother. Rex Brady (Kyle Lowder) is eager to get his romance with Sarah back on track, so he’ll make a grand gesture in hopes of moving this along.

DOOL fans can expect total shock for Sarah when Rex pops the question. He’ll push Sarah to become his fiancée again, but she’ll drag her feet on accepting this proposal. Perhaps Sarah won’t be able to get that sexy dream off her mind. She’ll definitely struggle to move forward with Rex when she still has such deep feelings for Eric.

Elsewhere, Eric will have a chat with his mom. Dr. Marlena Evans (Deidre Hall) is always willing to listen to her children and provide guidance. She’ll encourage Eric to open up on Wednesday, so he’ll take her up on the offer. Days spoilers say Eric will get a few things off his chest regarding Sarah and how he feels about her. He may be caught between letting go or moving on.

Over with Will Horton (Chandler Massey), he’ll bump into Leo Starke (Greg Rikaart). Days of Our Lives spoilers state that Leo won’t hesitate to gloat. While Will and Sonny Kiriakis (Freddie Smith) are out on bail, they’ll have to stay away from each other. That’ll leave Will in a funk before Leo even opens his mouth. It won’t take much for Leo to set Will off even further and start a heated confrontation.

Days of Our Lives spoilers say Marlena will get stuck in the middle of this conflict. She’ll do her best to play peacemaker, but it won’t do much good. To add to the tense vibe of the situation, John Black (Drake Hogestyn) will suddenly show up and seemingly take Leo’s side.

Will and Marlena will wonder what’s up, but DOOL viewers have the answer. John believes Leo is his son, so he’ll go easy on him for now. Across town, Diana Cooper (Judith Chapman) will head over to the Kiriakis mansion and seek Victor Kiriakis’ (John Aniston) help. She’ll hope they can form a partnership that’ll benefit both of them.

Victor will agree to Diana’s terms, so more drama’s ahead for John and Marlena! We’ll give you updates as other Days news comes in. Stick with the NBC soap and don’t forget to check CDL often for the latest Days of Our Lives spoilers, updates and news.