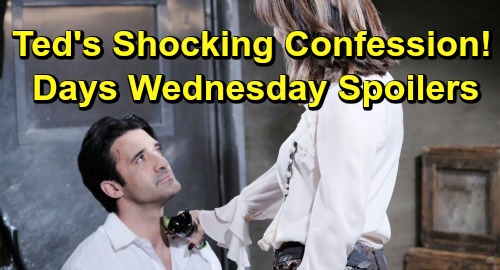 Days of Our Lives (DOOL) spoilers for Wednesday, July 10, tease that Hope Brady (Kristian Alfonso) will mull over Ted Laurent’s (Gilles Marini) disappearing act. She suspects Xander Cook (Paul Telfer) made Ted vanish, but proving it won’t be easy. Fortunately, Eli Grant (Lamon Archey) will pitch in as they work to crack the case. They’ll hope they can eventually get enough evidence to nail Xander.

DOOL fans can expect Xander to be on the hot seat soon. Days spoilers say Eli will bring Xander down to the station for a grilling session. He’ll have some tough questions, but Xander should wiggle out of trouble for now. The real drama should come once Kristen DiMera (Stacy Haiduk) turns on Xander next week.

Meanwhile, Days of Our Lives spoilers say Ted will make an admission. He’ll divulge the truth to Kate Roberts (Lauren Koslow), so it sounds like he’ll admit Holly Jonas (Harlow and Scarlett Mallory) is alive and well. Ted will likely come clean about his plot with Xander and the mysterious third partner he heard about. They may realize Kristen was that third partner, but they’ll still battle some confusion.

Ted and Kate can’t quite figure out how “Nicole Walker” (Arianne Zucker) fits in all this. They wondered if maybe Kristen was forcing Nicole to do her bidding, but Days viewers know they’re off track. Kristen is simply posing as “Nicole,” so she’ll unmask herself to her hostages by the time Friday rolls around.

Until then, “Nicole” will face Stefan DiMera’s (Brandon Barash) wrath once again. She’s already been on his bad side lately, but Stefan will finally decide he’s done. Days of Our Lives spoilers reveal that “Nicole” will be fired. Stefan will insist “Nicole” is no longer part of DiMera Enterprises or any of their plans for the future, so Kristen will be absolutely livid.

Finally, Ben Weston (Robert Scott Wilson) will get some great news. This undoubtedly ties in with Ben being cleared of all charges and the end of his nightmare. As for Eve Deveraux (Kassie DePaiva), she’ll do a little more maneuvering in hopes of keeping her life intact. Eve may avoid punishment for her crimes, but she’ll be backed into a corner when it comes to Jack Deveraux (Matthew Ashford).

Jack will hear Eve’s full confession before long, so stay tuned for that intense conversation. We’ll give you updates as other Days details emerge. Stick with DOOL and don’t forget to check CDL often for the latest Days of Our Lives spoilers, updates and news.