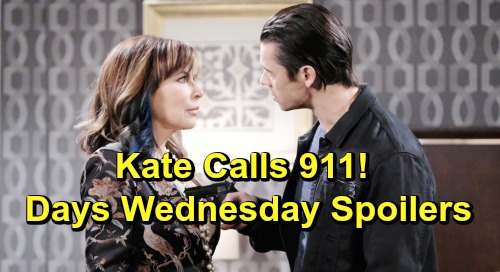 Days of Our Lives (DOOL) spoilers for Wednesday, June 26, tease that Jack Deveraux (Matthew Ashford) will try to learn more about Dr. Wilhelm Rolf’s (William Utay) memory serum. Unfortunately, Kayla Johnson (Mary Beth Evans) won’t be able to offer much information. She’ll admit this isn’t a hospital-approved treatment, so no one on staff can offer Jack a serum dose.

Of course, Will Horton (Chandler Massey) took the serum anyway, so Kayla will point Jack in Will’s direction. She’ll suggest Will can tell Jack everything he needs to know. Unfortunately, Jack’s behavior has been pretty horrible since he came back to Salem. Will’s going to call Jack out on that in Wednesday’s DOOL episode and basically tell him to get lost.

However, Days of Our Lives spoilers say Will’s initial outrage will die down. He’ll decide to hand over the diary after all, but only if Jack does something in return. Will will propose a deal: the diary in exchange for all charges against JJ Deveraux (Casey Moss) being dropped.

Days spoilers state that Jack will go along with the idea. He doesn’t really want to see JJ pay for helping Haley Chen (Thia Megia), so this deal will be a win-win. Even so, Jack will have some big decisions to make. He won’t be sure what he’s going to do yet, but he’ll feel more powerful once he’s got some control through this diary.

Other Days of Our Lives spoilers say Lani Price (Sal Stowers) will reach out to Eli Grant (Lamon Archey). She’ll hope they can talk about her attachment to David Ridgeway and the problems it caused between them. Lani will admit she went overboard. She was trying to fill the void her own baby’s death left in her heart, so she’ll be sorry she didn’t listen to Eli.

Eli may offer an apology as well. He was a bit harsh under the circumstances and perhaps should’ve tried harder to get through to Lani. These two should start moving toward a reunion eventually. Meanwhile, Kate Roberts (Lauren Koslow) will call 911 on Xander Cook (Paul Telfer). She just heard him confess to killing Ted Laurent (Gilles Marini), so she’ll think the cops should get over there ASAP.

Xander didn’t really kill Ted, but he also doesn’t want Kate running her mouth to the police. He’ll ultimately decide to hold Kate hostage, so Ted will gain a roomie soon. Over with Abe Carver (James Reynolds), he’ll try to help “Nicole Walker” (Arianne Zucker) out. “Nicole” will manage to get on Stefan DiMera’s (Brandon Barash) bad side, so Abe will attempt to undo the damage.

It sounds like an action-packed episode’s coming up. We’ll give you updates as other Days news emerges. Stay tuned to DOOL and don’t forget to check CDL often for the latest Days of Our Lives spoilers, updates and news.