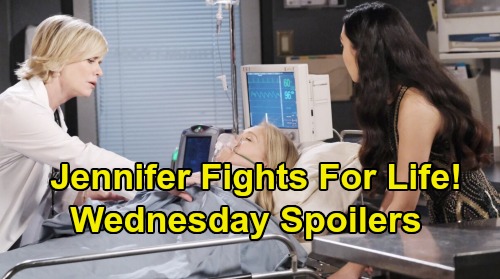 Days of Our Lives (DOOL) spoilers for Wednesday, November 6, tease that Gabi DiMera (Camila Banus) will do some taunting. She’ll be over the moon about how well her revenge plot worked, so she’ll happily rub her victory in Lani Price’s (Sal Stowers) face. However, Gabi’s in for a big surprise when Lani fights back.

Lani felt like she had to dump Eli Grant (Lamon Archey) to save Julie Williams’ (Susan Seaforth Hayes) life, but that doesn’t mean she’ll let Gabi get away with this unscathed. Days spoilers state that Lani will deliver a hard punch on Wednesday. She’ll sock Gabi right in the kisser and get some serious satisfaction out of it. It’s safe to say many DOOL fans will get the same satisfaction!

Gabi certainly deserves to be decked, but that won’t fix Lani’s problems. Now that Lani’s ended her relationship to Eli, she’ll be feeling lost and alone. Lani won’t know what she’s going to do next, but she’ll definitely know she hates Gabi with a passion.

Meanwhile, Eli will stop by the hospital and explain the puzzling situation to Julie. He just won’t understand how Lani could claim she doesn’t love him enough to marry him. Julie won’t understand either, so she’ll push Eli to talk to Lani again. Days of Our Lives spoilers say Julie will hold out hope that they can work through the drama.

Unfortunately, that’s just not going to happen – not as long as Gabi’s got the ability to kill Julie in the palm of her hands. In the town square, Jennifer Horton (Melissa Reeves) will be in bad shape. She just plummeted off the bistro balcony thanks to “Hope Brady” aka Princess Gina’s (Kristian Alfonso) shove. Jennifer’s fall will leave her with serious injuries, so Jack Deveraux (Matthew Ashford) will be absolutely terrified.

The same goes for JJ Deveraux (Casey Moss) and Haley Chen (Thia Megia), but they’ll try to stay calm and use their medical training to help Jenn ASAP. Once Jennifer’s at the hospital, Haley and Kayla Johnson (Mary Beth Evans) will get to work with the proper equipment. It won’t be long until Kayla decides Jennifer needs emergency surgery, so she’ll be wheeled in immediately.

As for Princess Gina, she’ll cover her tracks and deal with Rafe Hernandez’s (Galen Gering) questions. Princess Gina will get grilled about what she’s been up to, but she’ll play dumb and hope she doesn’t get caught. Rafe may think “Hope’s” behavior is pretty strange, but he probably won’t suspect she was behind Jennifer’s tumble. Days of Our Lives spoilers say Princess Gina will keep her secret while Jennifer fights for her life!