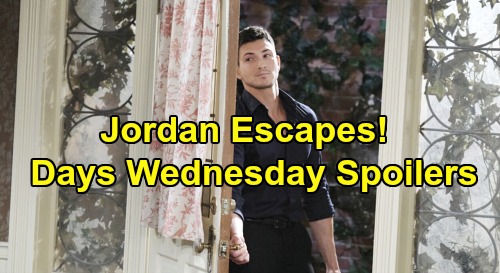 Days of Our Lives (DOOL) spoilers for Wednesday, October 30, tease that Lani Price (Sal Stowers) won’t give up on her future with Eli Grant (Lamon Archey). She’s in love and ready to begin a new chapter, so Gabi DiMera’s (Camila Banus) pacemaker plot presents a problem. Lani will do her best to outwit Gabi, but that plan won’t work out as well as she hopes. Gabi’s covered all her bases here and will be prepared for whatever Lani throws her way.

DOOL fans can expect Gabi to stand her ground on this wedding destruction. She’ll maintain that Lani’s going to dump Eli at the altar or else Julie Williams’ (Susan Seaforth Hayes) heart goes kaboom. As Days inches closer to Eli and Lani’s wedding day, an overwhelming sense of dread will set in. Lani will eventually realize Gabi’s not going to budge and there may be no strategy that can fix this.

In the meantime, Days of Our Lives spoilers say Ciara Brady (Victoria Konefal) will hide her fear. Jordan Ridgeway (Chrishell Hartley) just showed up to see Ciara, so that’s obviously concerning. Since Ciara suspects she was the intended cupcake victim, she’ll worry about what Jordan’s next move might be.

Jordan will assure Ciara that she just wants to talk. She’ll try to convince Ciara that Ben Weston (Robert Scott Wilson) was behind the poisoning, but Ciara won’t buy it. Nevertheless, Jordan will make her pitch and hope she can convince Ciara to leave with her. She’s already planning to skip town with David Ridgeway (Jaxton and Dexter Ellis), so she’ll feel like it’d be in Ciara’s best interest to come along.

Ciara won’t tip Jordan off to what she’s learned, but she’ll still hope to cause a delay. She’ll make a pitch of her own and suggest that Jordan should stick around. While Jordan and Ciara play a dangerous game, Ben will make sure JJ Deveraux (Casey Moss) is OK. JJ was knocked out at Rafe Hernandez’s (Galen Gering) place, where Ben found him unconscious on the floor.

Once JJ awakens, he’ll confirm that Jordan whacked him in the head. Ben will quickly fret about Ciara’s safety, so he’ll dash off to interrupt their latest confrontation. Days of Our Lives spoilers say Jordan will ultimately realize the jig is up. She’ll rush out the door with David, but Ben will manage to get his nephew back later. As for Jordan, she’ll be missing – and that should spell big trouble as we approach the looming time jump.

Until then, Nicole Walker (Arianne Zucker) will deal with more Xander Cook (Paul Telfer) drama. Xander will insist Eric Brady (Greg Vaughan) may still have feelings for Sarah Horton (Linsey Godfrey) – and Sarah will overhear. Some twists and turns are brewing in Sarah’s pregnancy storyline, so don’t miss all the action. We’ll give you updates as other Days news comes in. Stay tuned to DOOL and don’t forget to check CDL often for the latest Days of Our Lives spoilers, updates and news.