Days of Our Lives Spoilers: Baby David’s Future After Jordan’s Death – Will Father Be Revealed? 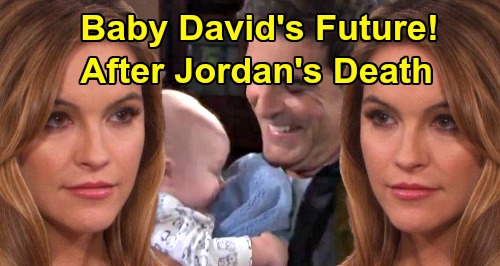 Days of Our Lives (DOOL) spoilers tease that a lot is coming in the lead-up to the big DOOL time jump that will occur on Friday, November 8, 2019. According to DOOL spoilers, there will be some major time-jump cliffhangers on that date, and one of them involves Jordan Ridgeway (Chrishell Hartley) and her brother Ben Weston (Robert Scott Wilson). According DOOL spoilers, Ben will be arrested for Jordan’s murder right before the time jump, and he’ll spend the year in prison for her murder.

This will come after Ben actually contemplates whether he’ll have to kill Jordan to keep Ciara Brady (Victoria Konefal) safe, and it seems that the physical evidence against him will be pretty strong if indeed he spends the time jump in prison. Clearly, it will take some time for Ben to be cleared of any wrongdoing, as this will all necessarily have to occur after the year-long time jump takes place.

But if Jordan dies, which it certainly seems that she will, and Ben is hauled off to prison for a year, then that means that someone has to assume responsibility for Jordan’s baby, David Ridgeway (Jaxton and Dexter Ellis). We know that David will still be around after the time jump, since the role of David is being recast with older twins. David will be a toddler after the time jump occurs, but who will be caring for him?

Well, Days buzz says it’s likely that Rafe Hernandez (Galen Gering) will still be caring for the little boy. That would be the easiest option, since both Jordan and Ben will be gone. But what about David’s father? Now that Jordan will be dead and gone, will viewers ever find out who David’s dad is? Jordan recently said on the show that she didn’t want to talk about David’s dad, and she indicated pretty strongly that he wasn’t someone she’d want in David’s life going forward.

But then again, this is Jordan that we’re talking about, and she tends to have a distorted sense of other people’s character. It could be that Jordan’s father is a regular person without any real issues, and that Jordan just told Rafe that his father was a bad person to deflect attention for some reason. Jordan’s not the most honest person, either, so who knows who David’s father really is or want kind of person he is.

Will Rafe ever try to locate David’s father? Or will he just set out to raise the kid himself and make him a part of the Hernandez family forever? Days of Our Lives spoilers hint that David’s father could come back into the picture at some point. Could he be someone that DOOL viewers already know? Time will tell, but given that the issue of David’s father recently came up on the show, we doubt that the issue will drop.

Do you think we’ll ever learn who David’s father is? Stay tuned to DOOL and don’t forget to check CDL often for the latest Days of Our Lives spoilers, updates, and news.