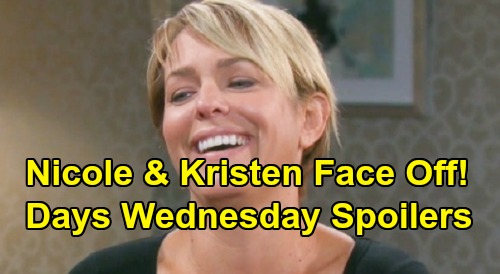 Days of Our Lives (DOOL) spoilers for Wednesday, September 11, tease that Nicole Walker (Arianne Zucker) will be back in Salem and ready for a faceoff. She’ll have a chance to blast Kristen DiMera (Stacy Haiduk) for her twisted plan, so DOOL fans can expect some explosive scenes. Nicole will rage at Kristen for the awful situation she was forced into. She did what she had to do for Holly Jonas’ (Harlow and Scarlett Mallory) sake, but she hated every minute of it.

Nicole will rip into Kristen for how Eric Brady (Greg Vaughan) and Brady Black (Eric Martsolf) were treated as well. She’ll be upset over all the drama that went on while she was gone, but at least the truth is out now. Nicole will be able to reclaim her life, but she’ll loathe the fact that Kristen isn’t going to prison. Days viewers will see plenty of conflict on Wednesday, so don’t miss all the action.

Of course, Gabi won’t be happy about that, but she’ll do it for Stefan’s sake. He loves his mother and doesn’t want to see her locked up for Kate’s attempted murder, so Gabi’s silence will mean the world to him. Over with Vivian, she’ll have some advice for a surprising Salemite. Sarah Horton (Linsey Godfrey) won’t be looking for this advice, but Vivian will provide it anyway.

Days of Our Lives spoilers say this will likely tie in with Sarah’s love life. Vivian might think Sarah needs to take notice of a doting and handsome guy like Xander Cook (Paul Telfer). He may not be the perfect man, but he only loves one woman and that’s Sarah. Then again, Vivian might offer inadvertent pregnancy guidance. She probably won’t find out about Sarah’s predicament, but she could still have some interesting words of wisdom.

Back with Kristen, she’ll get a fierce warning from John Black (Drake Hogestyn). Days of Our Lives spoilers say John will want Kristen to stay as far away from his family as possible. He’ll be sick of Kristen’s manipulation, but we all know it’s only going to get worse! We’ll give you updates as other Days news comes in. Stick with DOOL and don’t forget to check CDL often for the latest Days of Our Lives spoilers, updates and news.