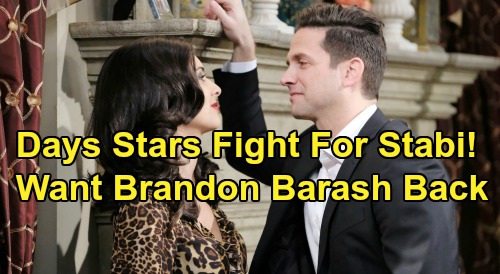 Days of Our Lives (DOOL) spoilers reveal that there’s a strong push to bring Brandon Barash (Stefan DiMera) back to the NBC soap. Of course, DOOL fans know Stefan is currently still on screen, but he finished filming months ago. It looks like Stefan will be killed off in the near future, so that’s quite a blow for “Stabi” fans.

Stefan and Gabi DiMera (Camila Banus) have become a sizzling hot couple for Days of Our Lives. You’d think the show would be bending over backwards to keep Stefan around, but he’s on his way out. There’s no word yet on Stefan’s last airdate, but it has to be coming up fairly soon. There’s a good chance Julie Williams (Susan Seaforth Hayes) will get Stefan’s heart after a tragedy occurs.

As for what’s ahead on Days, the show’s set to revisit a rather unpopular couple. DOOL viewers will recall when Gabi was paired up with Eli Grant (Lamon Archey), who’s now in another pretty popular pairing. Many fans seem to enjoy Eli’s sweet bond with Lani Price’s (Sal Stowers) as well as their great chemistry.

There definitely weren’t many people rooting for Eli and Gabi back when they were an item. Nevertheless, it appears they’ll be an item once again after the time jump. If you haven’t heard by now, Days of Our Lives spoilers say the show will skip into a new chapter. They’ll move one year ahead according to the last buzz.

This move makes sense from a writing standpoint since Lani may cause Stefan’s death. An on-duty incident could lead to Stefan’s demise, so it’s soapy for Gabi to make a play for Lani’s soon-to-be husband. Gabi’s about to lose her man, so she can just swipe Lani’s.

However, sometimes you just have to go where the chemistry is. It’s a shame that we’re losing Stefan and Gabi’s fiery passion. Lani and Eli’s adorableness will be missed, too. Luckily, Days of Our Lives could still turn things around. They could always rectify their mistake and bring Stefan back from the dead like so many other characters.

There’s a petition on Change.org to bring Brandon Barash back to Days, which was signed by Lamon Archey. Camila Banus also supported this petition, so they’re apparently not on board with Eli and Gabi’s reunion. As evidenced by both their social media accounts, they seem to think “Stabi” and “ELani” are the way the go!

Days of Our Lives spoilers say more changes are in store after the time jump, but let’s hope even bigger changes are brewing behind the scenes. Would you like to see Stefan return to Days? Are you upset about ‘Stabi’ and ‘ELani’ being destroyed? We’ll give you updates as other news comes in. Stay tuned to DOOL and don’t forget to check CDL often for the latest Days of Our Lives spoilers, updates and news.