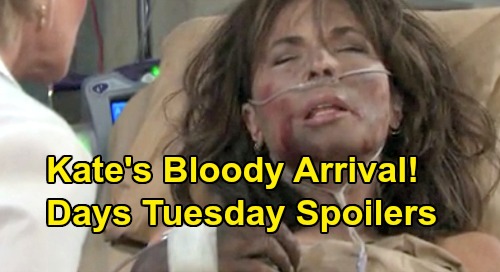 Days of Our Lives (DOOL) spoilers for Tuesday, September 10, tease that Kayla Johnson (Mary Beth Evans) and Jennifer Horton (Melissa Reeves) are in for a shock. They’ll be chatting at the hospital when the elevator doors open to reveal a gruesome sight. Kate Roberts (Lauren Koslow) will stumble in after dragging herself over from the cemetery, so she’ll naturally look like something out of a horror movie.

Once Kayla wraps her head around this dirty and bloody arrival, she’ll summon Haley Chen (Thia Megia) and get to work right away. Days spoilers say Kate’s condition will be critical, but Kayla and Haley will do whatever they can to help. In the meantime, JJ Deveraux (Casey Moss) will team up with his dad. He’ll do his part to make sure Jack Deveraux (Matthew Ashford) his memories back, but there’ll be a bit of a snag.

Dr. Wilhelm Rolf (William Utay) agreed to come back to Salem if he could continue his research independently, but he may drive a harder bargain in Tuesday’s DOOL episode. However, Jack’s ready to recapture his past and his family members are hopeful, too. JJ knows there’s no guarantee Jack will ever be the man he used to be, but it’s worth a shot. With JJ’s assistance, Jack should make a deal with Dr. Rolf and get this project going ASAP.

Other Days of Our Lives spoilers say Hope Brady (Kristian Alfonso) will deliver difficult updates to Doug Williams (Bill Hayes). As Julie Williams (Susan Seaforth Hayes) continues to decline, Hope will admit they’re looking at a grim outcome here. Doug’s been trying to remain optimistic, but Hope may reveal that Julie’s getting worse – and fast. Without a new heart, Julie’s facing certain death.

Julie will thankfully get a miracle eventually, but it’ll mean another Salemite’s life comes to an end. It looks like Stefan DiMera (Brandon Barash) will be the heart donor, but more drama has to play out first. Days of Our Lives spoilers say Gabi DiMera (Camila Banus) will freak over Stefan’s news on Tuesday. He’ll admit Vivian Alamain (Robin Strasser) shot and buried Kate, so Gabi will be outraged.

Gabi will insist they need to call the police immediately, but Stefan won’t want his mom to go down for this. He’ll defend Vivian’s desire for revenge and talk Gabi out of turning her in. This mess is only going to get messier in the coming episodes! We’ll keep you posted as other Days details emerge. Stay tuned to DOOL and don’t forget to check CDL often for the latest Days of Our Lives spoilers, updates and news.