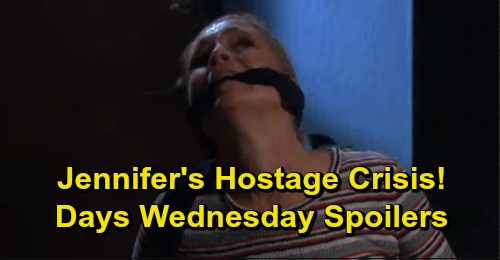 Days of Our Lives (DOOL) spoilers for Wednesday, September 18, tease that Anna DiMera (Leann Hunley) will deliver an emotional plea. She’ll feel like Kristen DiMera (Stacy Haiduk) may be Tony DiMera’s (Thaao Penghlis) only shot at freedom, so she’ll resort to begging. Anna will point out that Ted Laurent’s (Gilles Marini) death was an accident, not murder. She’ll insist Kristen has to help get Tony off the hook, so Kristen will consider it – but only to look good in Brady Black’s (Eric Martsolf) eyes.

Speaking of Brady, he’ll continue to wrestle with complicated feelings. DOOL fans know Brady nearly surrendered to temptation, so lust is getting the best of him. Some lingering love could be in the mix, too. Brady is drawn to Kristen despite her mistakes, which could be a recipe for disaster.

Days of Our Lives spoilers say Brady will open up to John Black (Drake Hogestyn) on Wednesday. He may admit he’s having a hard time resisting Kristen, so John will try to talk some sense into him. Kristen has hurt so many people so many times. John will make it clear that Kristen is bad news and will only bring more pain to Brady’s life, so Brady will try to accept that.

Of course, that plan won’t pan out for long. Days of Our Lives spoilers say temptation will remain for Brady, so more struggles are in his future. In the meantime, Jennifer Horton (Melissa Reeves) will find herself in a dangerous situation. Someone surprised her at the lab recently, and it turns out that someone was Dr. Henry Shah (Piter Marek).

Dr. Shah will hold Jennifer hostage at a hotel on Wednesday. Days spoilers say Jennifer will realize she’s on deep trouble here. Dr. Shah will be out for revenge, so Jennifer will fear she won’t make it out of this mess alive. Some suspenseful moments are coming up as Jennifer awaits Jack Deveraux’s (Matthew Ashford) urgent rescue.

Next, Ben Weston (Robert Scott Wilson) and Ciara Brady (Victoria Konefal) will seek answers. They were stunned to see Jordan Ridgeway (Chrishell Hartley) out of Bayview, so they’ll wonder what’s going on. Jordan will explain that she was well enough to leave, which led to a judge signing off on her release and giving her custody of David Ridgeway.

Rafe Hernandez (Galen Gering) will undoubtedly pipe up at some point. He’s legally responsible for Jordan, who’ll be living under Rafe’s roof for the time being. Unfortunately, Jordan will stand her ground on keeping Ben away from David. She’ll face Ciara’s fury over that along with her previous murder attempts. Neither Ciara nor Ben will be convinced Jordan’s truly recovered.

It sounds like the excitement’s revving up in Salem. We’ll give you updates as other Days details emerge. Stay tuned to DOOL and don’t forget to check CDL often for the latest Days of Our Lives spoilers, updates and news.