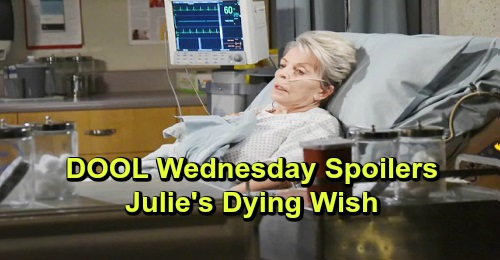 Days of Our Lives (DOOL) spoilers for Wednesday, September 25, tease that Jennifer Horton (Melissa Reeves) will change tactics. She’s been pretty defiant throughout this hostage crisis, but she’ll decide to gain Dr. Henry Shah’s (Piter Marek) trust instead. Jennifer will encourage Dr. Shah to open up about his issues, which will lead to a revealing look into his painful past.

Of course, Jennifer will just want to win Dr. Shah over and convince him to untie her. Days spoilers say Jenn’s plan will work, but she’ll hit another snag soon after. That’s because Dr. Shah will hope to sleep with Jennifer. He’ll push her to make love, and that’s obviously not something Jennifer’s interested in. When Jennifer tries to avoid a hookup, it won’t take Dr. Shah long to turn against her again.

Days of Our Lives spoilers say Dr. Shah will ultimately give Jack Deveraux (Matthew Ashford) a message. He’ll summon Jack to where he’s holding Jennifer captive and demand that Jack come alone. DOOL fans can expect Jack to tell a few fibs for Jennifer’s sake. He’ll manage to hide the truth from JJ Deveraux (Casey Moss) and take the next step on his own.

Jack will eventually find Jennifer with a knife to her throat. This is already a dangerous situation, but it’ll get even more dangerous soon. Dr. Shah is unhinged and out of control, so some shocking scenes are on the way.

In the meantime, Sarah Horton (Linsey Godfrey) will get ready to end her pregnancy. Xander Cook (Paul Telfer) will take Sarah to the abortion clinic as planned, but he’ll provide more than just emotional support. Days of Our Lives spoilers say Xander will help with Kristen DiMera’s (Stacy Haiduk) plot, but things will come to a screeching halt later this week. This embryo transfer isn’t really going to happen.

Over with Julie Williams (Susan Seaforth Hayes), she’ll deliver a final wish to Maggie Kiriakis (Suzanne Rogers). There’s no word on what Julie will ask for, but you can bet Maggie will promise to grant it. She’ll want to give Julie all the comfort she can as the patient fades fast.

It sounds like another gripping episode’s coming up. We’ll give you updates as other Days news emerges. Stay tuned to DOOL and don’t forget to check CDL often for the latest Days of Our Lives spoilers, updates and news.