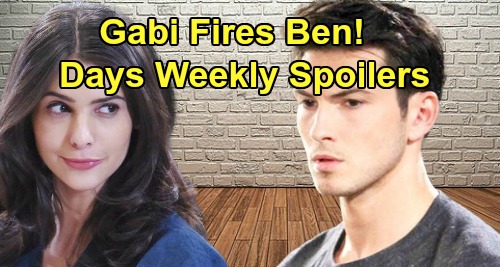 Days of Our Lives (DOOL) spoilers for the week of August 26-30 tease that chaos will erupt in Salem. Thanks to Kristen DiMera’s (Stacy Haiduk) exposure, several Salemites will be thrown for a loop. Sarah Horton (Linsey Godfrey) and Maggie Horton (Suzanne Rogers) will be stunned over Holly Jonas’ (Harlow and Scarlett Mallory) fake death. They’ll be sure to blast Xander Cook (Paul Telfer) for his role in the horrible scheme.

Eric Brady (Greg Vaughan) will also face some bombshells and confront Kristen as a result. He’ll lash out at her for deceiving him as well as nearly everyone else in town. Days of Our Lives spoilers say Kristen will try to cut a deal, which would bring a revelation about Holly and Nicole Walker’s (Arianne Zucker) whereabouts. There’ll definitely be pressure on Melinda Trask (Laura Kai Chen) and Jack Deveraux (Matthew Ashford) to take it!

Over with Tony DiMera (Thaao Penghlis), he’ll get arrested by Lani Price (Sal Stowers) and Eli Grant (Lamon Archey). Tony accidentally shot and killed Ted Laurent (Gilles Marini), but there’s no proof it was a mistake in the struggle. Anna DiMera (Leann Hunley) will urge Tony to use Gabi DiMera (Camila Banus) and Stefan DiMera’s (Brandon Barash) location as leverage, so we’ll see if he tries.

That means Kate’s moving in and will be cramping “Stabi’s” style soon enough! In Chicago, Eric will arrive with Jack and Jennifer Horton (Melissa Reeves). Days of Our Lives spoilers say they’ll be looking for Nicole and Holly answers. A shocker awaits on the other side of a door, but it looks like it’ll just be part one of Eric’s journey to the truth.

Back with Gabi DiMera (Camila Banus), she’ll tell Ben Weston (Robert Scott Wilson) he’s fired! Why will Gabi feel the need to can Ben? Time will tell, but Gabi doesn’t mess around! This could spark a bit of a war between Gabi and Ciara Brady (Victoria Konefal).

Finally, John Black (Drake Hogestyn) and Marlena Evans (Deidre Hall) will take a break from all the drama. They’ll finish celebrating their anniversary privately since their big bashes always go awry! We’ll give you updates as other Days news comes in. Stay tuned to DOOL and don’t forget to check CDL often for the latest Days of Our Lives spoilers, updates and news