BY hellodrdavis on December 27, 2019 | Comments: one comment
Related : Days of Our Lives, Soap Opera, Spoiler, Television 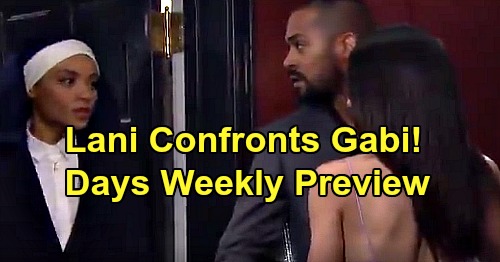 Days of Our Lives (DOOL) spoilers tease that we’re in for another big New Year’s Eve in Salem with some shocking character returns. The new DOOL promo for the week of December 30th is all about the exciting New Year’s drama and promises a lot, so let’s get right into it! First off, the promo shows Kayla Brady (Mary Beth Evans) and Justin Kiriakis (Wally Kurth) enjoying a romantic embrace at the New Year’s Eve party at Julie’s Place.

But little do they know who’s about to show up for the evening’s festivities. It seems that since Hattie Adams (Deidre Hall) has discovered that Steve Johnson (Stephen Nichols) is back in Salem, Steve (who is actually Stefano DiMera) will realize that he’s going to have to make his presence known as “Steve.” So after Kate Roberts (Lauren Koslow) suggests that he put on en eyepatch and pretend to be Steve, he’ll just go for it.

Of course, “Stevano” will have to make his big reveal at Julie Williams (Susan Seaforth Hayes) and Doug Williams’ (Bill Hayes) New Year’s Eve party, and it’s going to be huge. He’s shown in the promo standing in the midst of everyone and saying, “I’m back.” Of course, he’ll be Steve, not Stefano, to all the partygoers, and they’ll be stunned to see him back, especially since he hasn’t been in Salem since before his sister Adrienne Kiriakis’ (Judi Evans) death.

The promo shows John Black (Drake Hogestyn), Marlena Evans (Deidre Hall), Kayla, and Justin all turning in surprise to see Steve. We’ll see just how effective Stefano is at being Steve. According to Days of Our Lives spoilers, he’ll pull it off, but he just won’t seem like the same old Steve to his family and friends – and for good reason!

Next, the promo addresses two other big returns to Salem – that of Kristen DiMera (Stacy Haiduk) and Lani Price (Sal Stowers). Lani is shown coming out of a hotel room in full nun’s garb and surprising a smooching Eli Grant (Lamon Archey) and Gabi DiMera (Camila Banus), who seem to be kissing at the stroke of midnight. It should be an explosive scene as Lani and Gabi come face to face.

And as for Kristen, she’ll spy a shocking scene, as she witnesses Brady Black (Eric Martsolf) and Nicole Walker (Arianne Zucker) kissing passionately as the New Year turns. But unlike Lani who can control her rage, Kristen will be furious to see Brady back with Nicole. She (also in a nun’s habit) will confront Brady and Nicole.

Brady’s then shown asking Kristen why she cares because, after all, she’s married to God. And with that, Kristen peels off her habit to reveal a slinky red dress and says, “We broke up.” Afterwards, Kristen lunges at Nicole, physically attacking her, so it looks like we’ll get a good New Year’s catfight.

According to DOOL spoilers, Brady will eventually intervene and break up the altercation, but this will just be the start of Kristen fighting for her man. She’s not going to give up on Brady, and we can look for her to do everything she can to get him back in the New Year.