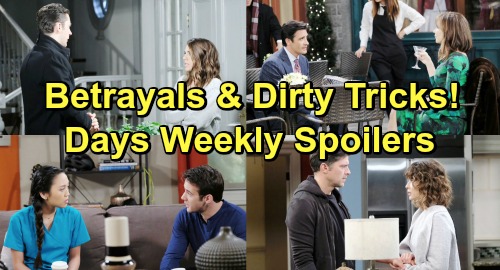 Days of Our Lives (DOOL) spoilers for the week of January 21-25 tease that some Salem bombshells are in store. For starters, let’s talk about Leo Starke (Greg Rikaart). He’s made an indecent proposal to Xander Cook (Paul Telfer), but Xander hasn’t committed to a hookup yet. Since Xander doesn’t swing that way, he’s hesitant to take that leap – even for the leverage Leo has.

However, Leo will feel like he’s going to get what he wants soon. He’ll go to bed with Xander, but he’ll realize he’s been duped when he wakes up alone and out of it. Days of Our Lives spoilers say Leo will realize he was drugged. It sounds like Xander will get sneaky in hopes of getting his hands on the truth.

Of course, Xander could be risking a lot here. Leo is just as manipulative as Xander is, so he’s not someone you want as an enemy. Speaking of enemies, Eve Donovan (Kassie DePaiva) will want to keep the upper hand on hers. The last thing Eve needs is Jack Deveraux (Matthew Ashford) hanging around Jennifer Horton (Melissa Reeves) rekindling their connection.

Days of Our Lives spoilers say Eve will think Jack needs to stay busy. She’ll push him to run for mayor of Salem, so he’ll seriously consider the idea. Meanwhile, Jennifer and JJ Deveraux (Casey Moss) will offer warnings to Jack. They’ll insist that he’s being used by the woman who claims to care about him. Eve isn’t a good influence on Jack, so his family will hope to put some distance between them.

Later, Eve will score a huge prize. Dr. Rolf’s (William Utay) diary will fall right into her lap, so she’ll hope she can make it work to her advantage. Knowing Eve as well as we do, we’d say she’ll succeed – at least at first. Things aren’t going to work out for Eve long-term, but she’ll have some minor victories here and there.

Other Days spoilers say Claire Brady (Olivia Rose Keegan) will have Tripp Dalton (Lucas Adams) right where she wants him. They’ll head to the bedroom, so it sounds like some steamy scenes are on the way. Tripp will also chat with Haley Chen (Thia Megia) this week, which could spark some jealousy. Nevertheless, it’ll be JJ who ultimately hears Haley’s undocumented immigrant secret.

On the corporate front, Victor Kiriakis (John Aniston) will name Brady Black (Eric Martsolf) the new CEO of Titan Industries. Over at DiMera Enterprises, Chad DiMera (Billy Flynn) and Stefan DiMera (Tyler Christopher) will have to share that title. They’ll become co-CEOs, which is a recipe for disaster. It’s doubtful these DOOL brothers will ever be on the same page about anything.

Stefan will go to war with Gabi Hernandez (Camila Banus) as well, so conflict will be erupting all over the place. Elsewhere, Sarah Horton (Linsey Godfrey) will face Eric Brady’s (Greg Vaughan) fury. He’ll explode when he finds out she’s been getting hot and heavy with Xander Cook (Paul Telfer).

Days fans won’t want to miss the shocking moments ahead. We’ll give you updates as other news comes in. Stick with DOOL and don’t forget to check CDL often for the latest Days of Our Lives spoilers, updates and news.

Eyes wander when Haley gets a new crush, and Hope meets a handsome stranger. Watch Days of our Lives, weekdays on NBC. #DAYS pic.twitter.com/wbWEJ5fhNu