Days of Our Lives Spoilers: Week of October 14 Preview – Marlena Barges In On Ericole’s Steamy Moment – Xander’s Vow to Sarah 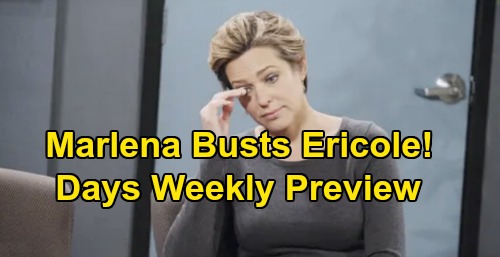 Days of Our Lives (DOOL) spoilers for the week of October 14-18 tease that some tight spots are on the way. DOOL’s weekly promo points to one for Eric Brady (Greg Vaughan) and Nicole Walker (Arianne Zucker). They’ve finally been given their chance at happiness, so they’ll want to make the most of it. At home, Nicole will treat Eric to a little surprise by strutting out in some steamy lingerie.

It won’t be long until Eric and Nicole are getting frisky on the sofa, but an unexpected visitor will catch them off guard. Days spoilers say Marlena Evans (Deidre Hall) will arrive and interrupt just as things are about to turn passionate. Nicole will leap off the couch and grab a blanket to conceal her skimpy outfit. Eric will do his best to help, but Marlena will burst in before they can conceal what’s happening here.

Days of Our Lives’ preview clip shows Eric smiling awkwardly as he greets his mom. Nicole will offer an uncomfortable smile of her own, but it may be Marlena who’s most embarrassed. She’ll undoubtedly apologize for barging in and intruding on their private time together.

However, Eric and Nicole should share a good laugh about this once Marlena’s gone. At least they have the opportunity to get caught! Nicole was being held captive while Kristen DiMera (Stacy Haiduk) ran around with her face not too long ago. After you’ve been through something like that, you really can’t sweat the small stuff.

Unfortunately, Nicole will find herself facing a much bigger problem thanks to Xander Cook (Paul Telfer). Xander doesn’t want Sarah Horton (Linsey Godfrey) to leave town, so he’s decided he has to tell Eric about the baby. If there’s no secret, there’s no reason for Sarah to go.

Of course, Xander doesn’t want to infuriate Sarah with his own involvement, so he’ll push Dr. Wilhelm Rolf (William Utay) to give Eric the pregnancy test results. It turns out Nicole will get the envelope instead, and Xander will have a change of heart.

When pressured, Nicole will agree to keep the secret – mostly because she won’t know what Xander might do if she doesn’t. Nicole has a rotten history with Xander, so she won’t be convinced he’s a changed man. To be on the safe side, Days spoilers say Nicole will stay tight-lipped and set herself up for a romantic blowup down the road.

As for Xander, he’ll assure Sarah that he can take care of her as well as her baby. Xander will try to sell himself as a doting family man. He’ll want Sarah to believe he can step up here, but she’ll remain wary. Even so, Xander’s devotion and their apparent spark will slowly help him make progress.