Days of Our Lives Spoilers: Week Of September 16 Preview – Jordan’s Back & Ciara’s Not Happy – Jen Held Captive By Dr. Shah 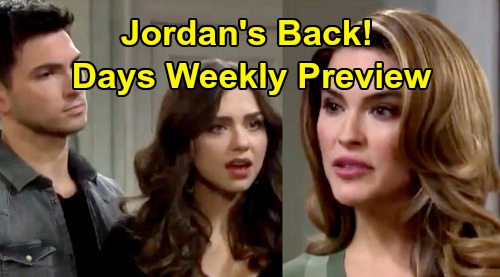 Days of Our Lives (DOOL) spoilers preview tease that viewers are in for a week of blood, sweat, and tears. The new DOOL promo for the week of September 16 promises a lot, starting with a big comeback. Ben Weston’s (Robert Scott Wilson) sister, Jordan Ridgeway (Chrishell Hartley) will be back on canvas this week, and it will cause quite a stir around Salem, and especially for Ben and Ciara Brady (Victoria Konefal).

As DOOL viewers will remember, Ciara was kidnapped by Jordan during her last stint in Salem. Jordan had lost it and thought that Ben was a danger to Ciara, so her “solution” was to take Ciara to a remote cabin and hold her hostage to protect her from Ben. And when Jordan realized that Ciara would never stay away from Ben, she proceeded to set the cabin on fire with Ciara inside. That landed her in Bayview, where she remained for several months.

But now Jordan’s treatment will be completed, and she’ll be released from Bayview. According to DOOL spoilers, Ben will find out about his sister’s release after the fact, when she’s already back in Salem and living with her son David Ridgeway and Rafe Hernandez (Galen Gering). Ben will then have the difficult task of telling Ciara that Jordan’s been released, which is where the DOOL promo picks up.

Ciara is shown confronting Jordan for trying to kill her, while Jordan expresses deep regret for her actions. Given the outraged look on Ciara’s face, it doesn’t look like Ciara’s going to accept the idea that Jordan is fully recovered and that she poses no ongoing threat. But it seems that they’ll all have to learn to co-exist, now that Jordan appears to be back to stay!

Next, the DOOL promo addresses some steamy scenarios. As DOOL viewers know, Eric Brady (Greg Vaughan) and Nicole Walker (Arianne Zucker) recently reunited after Eric tracked down his true love and Holly Jonas (Harlow and Scarlett Mallory) in Chicago. Eric then promptly broke things off with Sarah Horton (Linsey Godfrey), leaving him free to be with Nicole again. The promo shows Nicole and Eric making love, as well as a brief flash of Ciara and Ben hot and heavy in bed.

Finally, the new DOOL promo addresses a scary situation involving Jennifer Horton (Melissa Reeves). She’s shown gagged and tied up, and DOOL spoilers say that her captor will be none other than Dr. Henry Shah (Piter Marek), who will be fed up with Jennifer for leaving him for Jack Deveraux (Matthew Ashford). Jennifer had just started dating Henry when Jack returned from the dead, and of course Jennifer also recently dumped Henry for Jack again.

According to DOOL spoilers, Dr. Shaw will also turn out to be the one who trashed Dr. Wilhelm Rolf’s (William Utay) lab at the hospital. As it turns out, he’ll have just been fired from the hospital by Kayla Johnson (Mary Beth Evans), and that in combination with the Jennifer-related stress will be too much. He’ll end up taking it out on Jennifer and holding her hostage in a hotel room, and it looks like he’ll call Jack, who is on the phone with Henry in the preview promo, angrily asking what he’s done with Jennifer.

The good news here is that DOOL spoilers say that Jennifer will manage to wrangle herself partially free and send Jack a text saying where she’s being held. So, it looks like we’re in for some exciting rescue scenes as Jack and JJ Deveraux (Casey Moss) work together to get to Jen and Henry before Henry goes berserk and harms Jennifer.