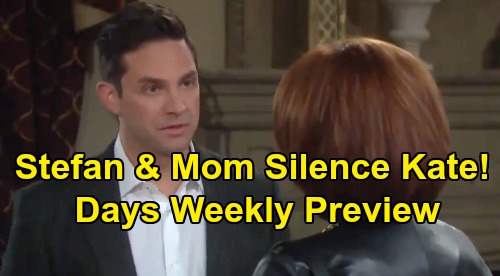 Days of Our Lives (DOOL) spoilers tease that Vivian Alamain (Robin Strasser) will have a big week. The new DOOL promo for the week of September 9 is all about Vivian’s latest revenge plot against Kate DiMera (Lauren Koslow). As DOOL viewers know, Vivian came back to Salem and made a beeline for Kate, with whom she holds a major grudge. Since Kate shot Vivian in cold blood and “killed” her last year, Vivian had a score to settle.

So, Vivian held Kate at gunpoint, then led her to the cemetery where she made Kate get close to a pre-dug grave and promptly pulled the trigger. The DOOL promo shows Vivian giddy after burying Kate, creepily rolling around on top of the dirt and cooing. Clearly, she’s a very disturbed lady and seems to be taking a little too much joy in her kill.

Later, Vivian will brashly share with a stunned Stefan DiMera (Brandon Barash) that she shot Kate and buried her in the cemetery. And it looks like Stefan will then share the news with Gabi DiMera (Camila Banus), who will smartly wonder whether Stefan is sure that Kate is really dead. That’s a good question considering (a) Vivian’s history of burying people alive, and (b) the fact that people in Salem just don’t seem to stay dead.

Well, in this case, Vivian’s intention was to kill Kate before burying her, and given the range at which she shot Kate, it was probably a reasonable assumption to assume that Kate actually died. But still, Vivian should have checked to verify that Kate was dead, because once Vivian leaves the scene, Kate will manage to un-bury herself and crawl out of the dirt!

According to DOOL spoilers, Kate will manage to drag herself in her dirt-covered state to University Hospital, where she’ll make it onto the elevator, then collapse on the floor after the elevator opens. It looks like Kate will be in critical condition by this point, but she’ll manage to verbally respond to Kayla Johnson (Mary Beth Evans) and Haley Chen (Thia Megia), who will quickly tend to her.

The DOOL promo shows Kayla asking an unconscious-looking Kate if she can hear her, with Kate dryly responding, “I’m shot, not deaf.” And according to DOOL spoilers, Kate will additionally whisper Vivian’s name, which will come as a shocker to Kayla, given that Vivian is dead as far as Kayla knows.

Of course, at some point, Vivian and Stefan will come to realize that Kate has survived her ordeal and is being treated at the hospital. And that will lead them to panic, since Kate could very well make a full recovery and implicate Vivian in her shooting. Stefan is shown in the promo telling Vivian that Kate will point the finger at her, and Vivian responds by telling Stefan to make sure that Kate never gets that chance!

So, it looks like the race will be on for Stefan and Vivian to silence Kate, which should surely cause some tension between Stefan and Gabi. After all, Gabi and Kate have been pretty close in recent months, as they’ve been scheming buddies in various endeavors. Surely Gabi won’t approve of any plot to “silence” Kate, so what’s Stefan going to do to protect his dear old mom?