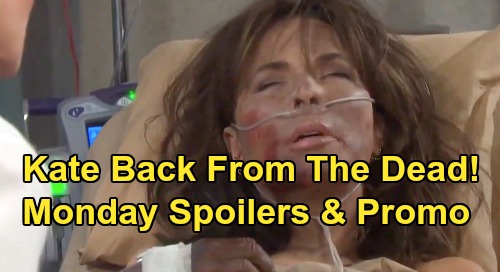 Days of Our Lives (DOOL) spoilers for Monday, September 9, tease that Brady Black (Eric Martsolf) will blast Victor Kiriakis (John Aniston) for trying to kill Ben Weston (Robert Scott Wilson). Brady just walked in on a murder in progress, so he immediately shut it down. He admitted he has issues with Ben and Ciara Brady (Victoria Konefal) dating, but he’ll assure Victor this isn’t the way to deal with them.

Victor will undoubtedly grumble about Brady ruining his plan, but “Cin” fans will be grateful. Ben will live another day, although Victor could try a less deadly breakup tactic soon. In the meantime, Days of Our Lives spoilers say Ciara will rip into Gabi DiMera (Camila Banus). She’ll fume over Gabi leaving Julie Williams (Susan Seaforth Hayes) to die, so Gabi will once again insist she thought Julie was faking it.

Of course, Gabi’s excuses won’t fly with Ciara or anyone else who cares about Julie. She’ll be loathed for contributing to Julie’s grim situation, but there’s nothing she can do for now. Speaking of grim situations, Kate Roberts (Lauren Koslow) will find herself in one at the cemetery. Vivian Alamain (Robin Strasser) just fired a shot, which led to wounded Kate falling into a prepared grave.

Days of Our Lives spoilers say Vivian will finish the burial, but she won’t realize Kate’s still breathing. DOOL viewers know Vivian’s usually all about burying people alive, but she actually intended for her victim to be dead this time around. Nevertheless, Kate will push through that dirt like it’s the zombie apocalypse and stagger to the hospital sooner or later.

Until then, Vivian will make a deadly confession to her son. She’ll fill Stefan DiMera (Brandon Barash) in on the horror that just unfolded, so Stefan’s sure to freak. He was on board with Vivian’s revenge, but this isn’t what he had in mind. You can bet Stefan will worry about Vivian getting caught. They won’t realize Kate’s busy fighting her way back to the land of the living.

Elsewhere, Days spoilers say Sarah Horton (Linsey Godfrey) mull over her pregnancy and try to figure out if she should tell Eric Brady (Greg Vaughan). While Sarah considers her options, Eric will tell Nicole Walker (Arianne Zucker) all about Sarah and how they came together. Nicole will understand as long as she gets her man back – and she will. Eric’s heart belongs to Nicole and that’s all there is to it!

It sounds like some great drama’s ahead. We’ll give you updates as other Days news comes in. Stay tuned to DOOL and don’t forget to check CDL often for the latest Days of Our Lives spoilers, updates and news.