Days of Our Lives Spoilers: What Happened To The Real Nicole Revealed – Captive With Holly? 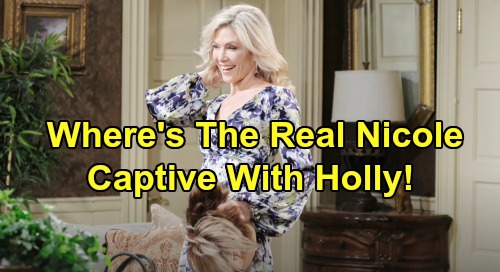 Days of Our Lives (DOOL) spoilers tease that Sarah Horton (Linsey Godfrey) and Eric Brady (Greg Vaughan) will finally get to make their big declaration of mutual love. These two have been pining for each other for months now, and of course things were complicated because of Sarah’s relationship and marriage to Rex Brady (Kyle Lowder). Sarah and Eric danced around their feelings for months, but they’ll finally get their chance to put their feelings on the table.

According to DOOL spoilers, Sarah is going to make a big mistake when she accidentally refers to Eric when attempting to declare her love for Rex. And as viewers probably know by now, Kyle Lowder, who portrays Rex, is exiting canvas within the next few days. That will pave the way for Sarah and Eric to finally admit their true feelings for each other and quit hiding their feelings.

But there’s a big issue that has been left unresolved for viewers, and that has to do with Eric’s true love, Nicole Walker (Arianne Zucker). Sure, there’s a fake Nicole – in the form of Kristen DiMera (Stacy Haiduk) – running around Salem right now. That Nicole has rebuffed Eric and treated him terribly, all because Kristen really wants Brady Black (Eric Martsolf). And that will almost surely lead Eric to act on his feelings toward Sarah.

But what about the real Nicole? What’s happened to her? Well, on a recent episode, Kristen alluded to Nicole being dead when she was talking to Tony DiMera (Thaao Penghlis) in Chicago. But is Nicole really dead?

Well, there is good reason to believe that the real Nicole is alive. After all, Arianne Zucker, who portrays the character, is back on contract with DOOL and is currently filming. Since the show tapes a full six months in advance, that means that the actress is sticking around for quite some time down the road.

And since Kristen surely can’t pull off masquerading as Nicole forever, that means that at some point, viewers will see Nicole return. But she’ll have to return with answers to some key questions. How did she escape the explosion and fire in the DiMera warehouse? Where has she been all of this time? Does she have her memories, or is she amnesiac like Will Horton (Chandler Massey) and Jack Deveraux (Matthew Ashford) were when they returned from the dead?

Viewers may not be able to stomach another amnesia storyline, so hopefully Nicole has all her memories in tact. There will certainly be a lot of explaining that needs to be done when she does return, though, and she’ll be horrified to learn about Holly Jonas’ (Harlow and Scarlett Mallory) death…that is, unless she’s been reunited with her daughter off-screen, which is always a possibility!

After all, when Holly was allegedly killed in the car accident/explosion, it was stated that she was then taken to live with a “new family.” What if the real Nicole was being held by Kristen and Xander Kiriakis (Paul Telfer) somewhere, and Holly was taken to her after the car accident? Stranger things have certainly happened on DOOL, so this is an intriguing possibility.

At any rate, it will be interesting to see what ended up happening to Nicole, how she survived the explosion, and whether she and Holly are somehow together. Where do you think Nicole has been all this time? Stay tuned to DOOL and don’t forget to check CDL often for the latest Days of Our Lives spoilers, updates, and news.