Days of Our Lives Spoilers: What’s Next for Ben and Ciara Revealed – Cin Baby Bomb Ready to Drop? 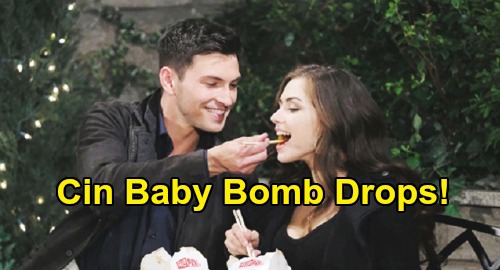 Days of Our Lives (DOOL) spoilers reveal that one couple is waiting on their next wave of drama. Ben Weston (Robert Scott Wilson) and Ciara Brady (Victoria Konefal) have battled plenty of obstacles to keep their bond intact.

Their relationship is stronger than ever, but they can’t go too long without another shocker. No drama means no story, so we need something to keep “Cin” on our screens.

Haley Chen (Thia Megia) already has the PTSD angle covered. She’ll struggle with alarming visions of Claire Brady (Olivia Rose Keegan) for a while – although she honestly wasn’t even that tormented by Tripp Dalton’s (Lucas Adams) former girlfriend. Haley was stuck in a fire Claire set, but she didn’t provoke Claire’s fury quite like Ciara did.

Ciara Brady Should Be The One Who Suffering From PTSD

Ciara should have PTSD if anyone’s going to have it, but it makes sense to let Haley take the lead here since it’s building to Tripp’s exit story. However, that still leaves Days with a problem. What’s next for Ciara and Ben?

Rafe Hernandez (Galen Gering) told Ben that Jordan Ridgeway (Chrishell Hartley) still didn’t want him around David Ridgeway. He promised to revisit the idea after he became a more permanent guardian, but that could take some time. Even if Rafe allows Ben to see David, that’s not much of a storyline either. Ben and Ciara will need a bombshell to shake things up once again.

Days of Our Lives may have offered a crucial clue in a recent episode. While chatting about David, Ben mentioned potentially having a family of his own someday. He also exchanged a sweet and slightly mischievous glance with Ciara. Is a “Cin” family something that’ll happen down the road or could they be forced into parenthood sooner? A surprise pregnancy would give Ciara and Ben the story they need.

Is A Pregnancy Storyline Coming For Ciara Brady And Ben Weston?

DOOL viewers would probably have mixed feelings about that. It’s too soon in Ben and Ciara’s relationship to settle down and have kids, but soap babies are rarely known for their perfect timing. They come when they come, and their parents just have to do their best.

Ciara’s potential pregnancy would bring even more concerns about her romance. Hope Brady (Kristian Alfonso) certainly wouldn’t be thrilled about the former serial killer being a dad to Ciara’s child. Ben would also worry about passing on some dark genes to his kid. There’d be a lot of interesting topics to explore and places to go with this.

Days of Our Lives spoilers say the show will indeed have to go somewhere! Are baby plans in store for Ciara and Ben? Do you think that’d be a good “Cin” story or would you like to see some other drama first? We’ll give you updates as other Days news comes in. Stay tuned to DOOL and don’t forget to check CDL often for the latest Days of Our Lives spoilers, updates and news.