Days of Our Lives Spoilers: Will Kristen Take Gabi Down – Reveal Lani’s Secret? 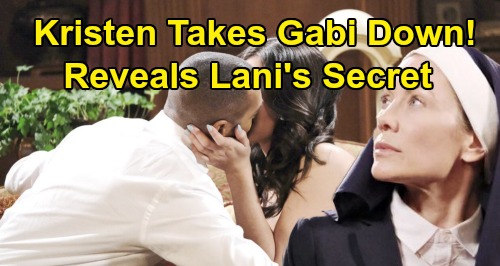 Days of Our Lives (DOOL) spoilers tease that Kristen DiMera (Stacy Haiduk) may soon be back to her old ways. As DOOL viewers know, she’s about to get a big wakeup call from JJ Deveraux (Casey Moss), who has just found her in the convent gardens. What transpires next will terrify Kristen, as she quietly resigns herself to her fate. But according to Days spoilers, Kristen will survive her ordeal with JJ, possibly when Lani Price (Sal Stowers) and Eli Grant (Lamon Archey) intervene.

Whatever the case, DOOL spoilers are clear that Lani will attempt to talk JJ down, and that Kristen will live to see another day. And at some point, Eli should get his important message across to Kristen, which is that she needs to sell her shares to Gabi DiMera (Camila Banus). Both Gabi and Chad DiMera (Billy Flynn) want the DiMera shares that Kristen is about to bequeath to the convent as part of her decision to become a nun.

Since the time jump, we’ve seen a very different Kristen than that of the past. She’s now resigned to a life of poverty and quiet contemplation, but we all know that this can’t last for too long. Kristen is clearly reacting to the loss of her baby and is running from the pain of losing both the baby and Brady Black (Eric Martsolf). At some point, the feisty, vengeful Kristen will surely emerge, and it could have everything to do with Gabi and the DiMera shares.

Kristen has recently learned about how Gabi blackmailed Lani into dumping Eli at the altar last year, and she was appalled. One wonders if she’d ever use that secret to help Lani in the future, and to take Gabi down and help destroy her attempt to usurp more control of DiMera Enterprises. After all, it looks like Kristen is going to come into direct contact with Eli, who will pass along a message about selling her shares to Gabi.

Might this snap Kristen back into a mode where she wants to protect her family business? DOOL viewers will remember that when Kristen was masquerading as Nicole Walker (Arianne Zucker), she went head-to-head with Gabi for the CEO position. She didn’t seem to care at all for Gabi and didn’t want her in charge of the family company.

And there’s another wrinkle in the drama here as well, and that’s that Stefano DiMera is back, currently inhabiting Steve Johnson’s (Stephen Nichols) body. Stefano seems to know that Kristen is in the convent in Rome, and he’ll surely want his daughter back in the fold – and he surely won’t want her just giving her shares of DiMera Enterprises away.

If Stefano ends up getting to Kristen and the two start looking for a way to bring down Gabi, then Kristen could expose Gabi’s blackmail scheme, which could land her in a lot of trouble.

After all, Gabi has been threatening the life of Julie Williams (Susan Seaforth Hayes) for over a year, and she could be in some serious legal trouble and lose Eli if the truth comes out about what she did to Lani. Plus, the DiMera board certainly wouldn’t be happy with Gabi if they learned about her blackmail scheme.

Exposing Gabi could be a way for Kristen and Stefano to oust Gabi permanently from DiMera Enterprises.

We’ll see what happens here, but it sure seems like Kristen is armed with volatile information that could destroy Gabi. Do you think that Kristen will betray Lani’s confidence and spill the beans about what Gabi has done? Stay tuned to DOOL and don’t forget to check CDL often for the latest Days of Our Lives spoilers, updates, and news.