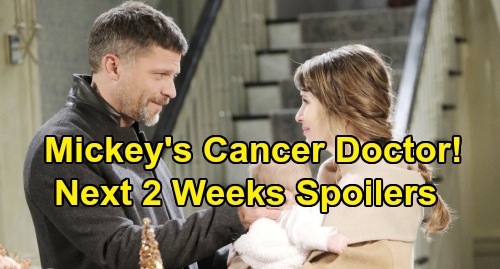 Days of Our Lives (DOOL) spoilers for the next two weeks tease that some tough blows are on the way. During the week of December 9-13, Sarah Horton (Linsey Godfrey) and Eric Brady (Greg Vaughan) will get terrible news about their daughter. Mackenzie “Mickey” Horton will be given a cancer diagnosis, so that’ll certainly be difficult to hear. Mickey’s neuroblastoma will leave Eric and Sarah terrified about what the future holds.

However, these parents will band together after they wrap their heads around the diagnosis. Sarah and Eric will learn there’s a specialist in Boston who could help Mickey. They’ll head off canvas for just a bit while Mickey gets treatment there. Of course, that’ll leave poor Xander Kiriakis (Paul Telfer) behind to wait and worry. He still thinks of Mickey as his daughter, so he’ll be devastated, too.

Xander will have more time on his hands, which could bring a setback for Ciara Brady (Victoria Konefal). Days spoilers say Xander will develop some serious suspicions in the week ahead. Ciara had better be careful – and that’s exactly what Ben Weston (Robert Scott Wilson) will tell her when she goes to visit him again. They’ll talk about his worsening legal situation and what Ciara plans to do about it.

Justin Kiriakis (Wally Kurth) will be next on Ciara’s list of meetings. She’ll beg him to take Ben’s case, so he’ll end up heading to Statesville and hearing Ben out. Meanwhile, Kate Roberts (Lauren Koslow) will rip into Sonny Kiriakis (Freddie Smith) over his kiss with Evan Frears (Brock Kelly). After Kate gets the scoop and blasts Sonny, it appears she’ll immediately dash off to tattle on him. Kate will show up to see Will Horton (Chandler Massey) the very same day.

That could put Will in the visiting area around the same time as Justin. Perhaps they’ll cross paths as one’s coming and one’s going. Whatever the case, Days of Our Lives spoilers say Justin will indeed come face to face with Adrienne Kiriakis’ (Judi Evans) killer – at least DOOL wants us to believe Will’s a killer. The truth could be far more complicated once it’s revealed down the road.

In the meantime, “Princess Gina Von Amberg” aka Hope Brady will feel like the jig is almost up. She’ll contemplate eliminating Abigail DiMera (Kate Mansi), but there may not be enough time for that. Days of Our Lives spoilers say “Princess Gina” will ultimately decide to flee, but there’ll be some incident that keeps her around.

In Rome, JJ Deveraux (Casey Moss) will nearly kill Kristen DiMera (Stacy Haiduk) outside the convent. Thankfully, Lani Price (Sal Stowers) will stop JJ in the nick of time. It looks like Lani will convince JJ to lower his weapon and get the help he needs.

During the week of December 16-20, Julie Williams (Susan Seaforth Hayes) will indeed help JJ as he battles this drug addiction. JJ will work hard to get clean, but it’ll definitely be an uphill battle. Back with Will, he’ll make a hard decision to preserve Sonny’s shot at happiness. It sounds like Will may file for divorce and push Sonny to move on with Evan.

Other Days of Our Lives spoilers say “Princess Gina’s” secret lair will be discovered. Rafe Hernandez (Galen Gering) will be floored when he sees the princess pad – complete with Gina’s special throne. He’ll obviously have questions, but will “Princess Gina” be able to cover up “Stefano DiMera” aka Steve Johnson’s (Stephen Nichols) portrait in time? Regardless, alarms bells will go off for confused Rafe.

Next, Lani and Kristen will make a pact. They’ll be fed up over their struggles and ready to take action. Days of Our Lives spoilers say Kristen and Lani will come up with a way to get what they want. It won’t be long until Kristen calls Gabi Hernandez (Camila Banus), which will leave Gabi in shock.

Over with Marlena Evans (Deidre Hall), she’ll put her foot down on the topic of “Hope.” Marlena will give John Black (Drake Hogestyn) an ultimatum about his involvement with her. John views “Hope” as harmless, but Marlena’s annoyed at best and nervous at worst. She’ll want to put some distance between John and Hope or else they’re going to have a real problem.

The next two weeks will bring some hot drama, so don’t miss what’s in store. We’ll give you updates as other Days details emerge. Stay tuned to DOOL and don’t forget to check CDL often for the latest Days of Our Lives spoilers, updates and news.