BY hellodrdavis on August 19, 2019 | Comments: one comment
Related : Days of Our Lives, Soap Opera, Spoiler, Television 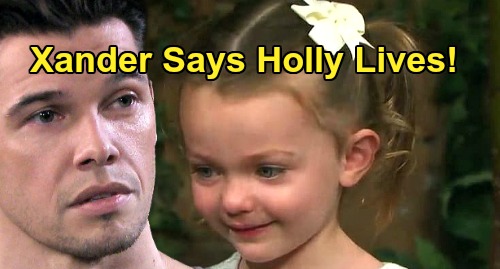 Days of Our Lives (DOOL) spoilers tease that Xander Kiriakis (Paul Telfer) will make a shocking revelation to many Salem residents. As DOOL viewers know, Xander has been harboring many secrets, including the fact that Kristen DiMera (Stacy Haiduk) is alive and has been masquerading as Nicole Walker (Arianne Zucker). But he’s also been hiding the fact that Nicole’s daughter Holly Jonas (Harlow and Scarlett Mallory) is alive as well.

As far as everyone else knows, Holly died in a vehicle explosion after she was kidnapped from the DiMera mansion. But in reality, Xander and Ted Laurent (Gilles Marini) faked her death and have the little girl hidden away, supposedly with some other family. Xander has kept quiet about the whole thing, primarily because he’d be in danger from Kristen if he came forward, but things are about to change.

As DOOL viewers know, Xander is on the verge of spilling Kristen’s existence to the cops, provided they give him immunity for his many crimes. And according to DOOL spoilers, the fake Nicole, who’s really Kristen, is going to be unmasked in a very public way. And once Kristen is in custody and supposedly unable to harm him, it looks like he’s going to spill the beans about Holly being alive.

Days of Our Lives spoilers say that Xander will soon swear to Maggie Kiriakis (Suzanne Rogers), Sarah Horton (Linsey Godfrey), and Eric Brady (Greg Vaughan) that little Holly is alive. They’ll naturally be suspicious of anything that Xander has to say, especially since it will also be revealed that Xander was working for Kristen. But soon, it seems they’ll come to believe him, and that will leave them with plenty of questions.

Of course, Maggie, Sarah, and Eric are going to be pretty peeved at Xander for keeping the news about Holly to himself, especially when they were going through so much anguish over her “death.” After all, Maggie turned to the bottle after many years of sobriety after Holly’s death, and Xander supposedly considers Maggie to be a friend. It doesn’t look like anyone will be too understanding with Xander at this point.

In fact, Xander can probably kiss any chance he might have had with Sarah goodbye. She’ll be plenty disgusted at him for keeping the Holly secret, and it will probably take him a considerable amount of time to get back into Sarah’s good graces after this.

At any rate, it looks like the attention of Maggie, Eric, and Sarah will now be turned toward finding Holly. Of course, whether Xander knows where Holly was taken after her abduction remains to be seen – he may ultimately have no idea where Kristen arranged for her to go, so he might not be able to be much help there. But it he is able to shed some light on where Holly is, that might go a long way toward seeking forgiveness for the pain he’s helped to cause.

Do you think that Xander will ultimately help track down Holly and redeem himself? Stay tuned to DOOL and don’t forget to check CDL often for the latest Days of Our Lives spoilers, updates, and news.