BY Heather Hughes on May 20, 2019 | Comments: 2 comments
Related : Days of Our Lives, Soap Opera, Spoiler, Television 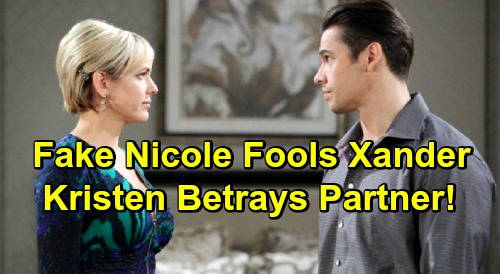 Days of Our Lives (DOOL) spoilers tease that more shockers are ahead in Nicole Walker’s (Arianne Zucker) hot plot. Monday’s DOOL episode, May 20, brought some clarity on Nicole’s latest stint in Salem. As we expected, this is not the same Nicole we’ve come to know and love.

Of course, that doesn’t mean we can’t enjoy this version! In fact, many Days fans thought Zucker’s latest scenes were hilarious. Her impression of mopey Eric Brady (Greg Vaughan) was fun and so was all that witty banter with Xander. However, all of that only served to confirm that this isn’t the real Nicole.

“Nicole” admitted that it her phony grief was exhausting. She enjoyed it once she was finally able to rip into Eric. “Nicole” added that she’d respect Eric more if he had stood by his reasons for letting Chloe Lane (Nadia Bjorlin) take Holly Jonas (Harlow and Scarlett Mallory). She finds it annoying that Eric couldn’t find a backbone. “Nicole” even called the daughter she worked so hard to get a “whiny brat.”

Obviously, these aren’t things the true Nicole would say. She loved Eric with all her heart and wouldn’t enjoy tormenting him for fun. Likewise, Nicole wouldn’t be so callous about Holly. She adored that little girl, so what’s going on here?

Although brainwashing remains an option, we’re still going with Kristen DiMera (Stacy Haiduk) in a Nicole mask. It makes the most sense considering this Nicole is awfully Kristen-like – right down to that maniacal laugh. “Nicole” even gazed at Stefano DiMera’s (Joseph Mascolo) portrait recently. Everything about this storyline screams Kristen.

Some fans out there have dismissed the imposter idea due to Nicole’s voice. If someone were actually donning a mask and impersonating someone, people would notice a different voice coming out. The problem is it doesn’t work when you apply real-world logic to the soap world. Daytime dramas have done plenty of mask stories before and the details have never been an issue.

If Days of Our Lives actually wants to address the voice thing, there’d be an easy explanation. They could just have some high-tech device attached to fake Nicole’s throat – which is actually how the soapy primetime show Jane the Virgin handled a mask story once. A simple strip was peeled off during the big reveal and voila! Instant voice change.

Nevertheless, this is probably just something Days will gloss over. There’s no need to make this harder than it has to be. Regardless, there was another interesting revelation that came out during “Nicole” and Xander’s celebration. Based on Xander’s comments, he seems in the dark on the imposter situation. Xander appears to truly believe Nicole is now bitter and looking out for herself.

Days of Our Lives spoilers say Xander should be in for a rude awakening soon enough. Since this is most likely Kristen and she hasn’t let Xander in on her secret, she may plan to take him down, too. “Nicole” is thrilled that her scheme is working like a charm, but there’ll inevitably be some snags down the road.

It sounds like the excitement’s about to rev up in Salem. We’ll give you updates as other Days news comes in. Stay tuned to DOOL and don’t forget to check CDL often for the latest Days of Our Lives spoilers, updates and news.