BY Heather Hughes on May 20, 2019 | Comments: one comment
Related : Days of Our Lives, Soap Opera, Spoiler, Television 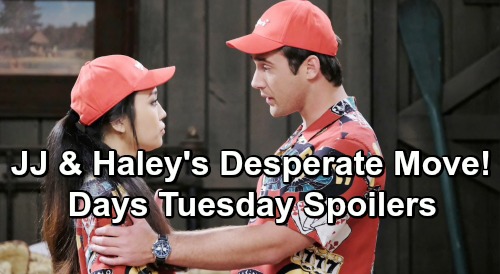 Days of Our Lives (DOOL) spoilers for Tuesday, May 21, tease that Claire Brady’s (Olivia Rose Keegan) fury will erupt. She feels like she’s lost everything, so she’ll be looking for someone to blame. Claire should really be blaming herself, but she’ll end up ripping into Eve Donovan (Kassie DePaiva) instead. She’ll think Eve should’ve known her ruthless plan would end in disaster.

Eve blackmailed Haley Chen (Thia Megia) in hopes of giving Jack Deveraux’s (Matthew Ashford) campaign a final boost. Claire trusted that her partner in crime would keep her out of the drama, but Eve obviously couldn’t do that. Since Tripp Dalton (Lucas Adams) put the pieces together and dumped Claire immediately, Claire will blast Eve with everything she’s got.

Eve will be sorry that Claire’s hurting, but Days of Our Lives spoilers say she won’t have any real regrets. DOOL fans know Eve would’ve done just about anything to score Jack a win. Now that Jack’s taking on the role of mayor, he’ll make some surprising moves in his new position. The first one involves the police commissioner job, which Rafe Hernandez (Galen Gering) will turn down.

Days of Our Lives spoilers say Jack will select a shocking alternative when he appoints Eve. She has no qualifications, but Jack will still think she’s got what it takes to succeed. Eve will be a bit overwhelmed at first, but she’ll ultimately embrace the chance to boss everyone around at the Salem PD. She’ll start by forcing Hope Hernandez (Kristian Alfonso) to hand over her badge and gun.

Other Days spoilers state that Haley and JJ Deveraux (Casey Moss) will need some assistance. They recently went on the run, but they can’t stay in one place for too long. Plus, JJ and Haley are going to need some supplies soon. Tripp will come through on everything they ask for, so the runaways will be incredibly grateful.

Haley and JJ will don some disguises so they can eventually make their way to the Horton cabin. Despite the continued hunt for them, JJ will be certain they can get through this together. It sounds like some great action is coming up! We’ll give you updates as other Days news emerges. Stick with DOOL and don’t forget to check CDL often for the latest Days of Our Lives spoilers, updates and news.