Days of Our Lives Spoilers: Eve’s Past With Xander Comes Back To Bite – Kristen DiMera Forces Corruption In Salem PD & Mayor’s Office

BY hellodrdavis on May 20, 2019 | Comments: one comment
Related : Days of Our Lives, Soap Opera, Spoiler, Television 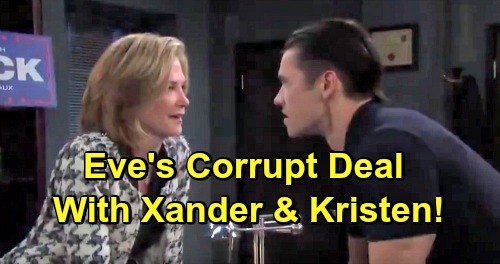 Days of Our Lives (DOOL) spoilers tease that Jack Deveraux (Matthew Ashford) is going to make an astounding announcement. After Rafe Hernandez (Galen Gering) turns down the police commissioner job left vacant after Hope Hernandez’s (Kristian Alfonso) firing, Jack will make Eve Deveraux (Kassie DePaiva) the new commissioner. It will be a move that will stun Salem, but Eve will take the position seriously and get to work.

Eve’s appointment as commish will have a profound effect on Salem. In fact, the entire DOOL video promo for this week centers on Eve and her new regime. But there’s one part of the promo in particular that we find interesting, and that’s a quick scene where the new commish is ominously staring down Xander Cook (Paul Telfer), while he stares back just as threateningly.

Of course, Xander is freshly back in town and has some plot going on with a secret partner. That partner appears to be Nicole Walker (Arianne Zucker), but as CDL has stated, it’s quite likely that this version of “Nicole” is actually Kristen DiMera (Stacy Haiduk) in some sort of disguise. Days of Our Lives spoilers say that Kristin is coming back, and it sure looks like she’s still in cahoots with Xander.

DOOL viewers will also remember that it wasn’t too long ago that Xander was also in cahoots with Eve. Offscreen, Xander and Eve connected and Xander helped Eve bring Jack back to Salem. Eve even had possession of Dr. Wilhelm Rolf’s (William Utay) diary for a while, until Xander stole it back from her and the two went their separate ways.

But now there’s an interesting situation. Eve’s police commissioner and on one side of the law, and Xander’s resurfaced and on the opposite side of the law. And if Xander is indeed in cahoots with Kristen, it probably won’t be long before Xander and Kristen want some favors from Eve.

We could see a situation arise in which, for example, Kristen comes back to town and hides out, and asks Eve to look the other way. Kristen and Xander could hold their prior involvement with Eve over her head. After all, if it ever came out that Eve had dealings with Xander and Kristen in the past, then she could very well lose her job.

Or it could get more sinister than that. Xander and/or Kristen could demand that Eve actually obfuscate evidence or make official decisions about cases that could serve their agenda somehow. This could easily lead to some big-time corruption in the Salem PD, and that would mean that it would take place under Jack’s watch.

In the coming days, DOOL spoilers say that Xander will somehow come to Jack’s aid. It’s difficult to imagine Xander helping out the new mayor out of the goodness of his heart. Chances are, Xander will end up doing something for Jack that he’ll later hang over Jack’s (or Eve’s) head. We bet some police corruption will follow!

At any rate, it looks like Eve may be in for some interesting times at commish given her past with Xander and the DiMeras. Do you think that her administration is ripe for corruption? Stay tuned to DOOL and don’t forget to check CDL often for the latest Days of Our Lives spoilers, updates, and news.