Days of Our Lives Spoilers: Xander Followed to DiMera Secret Room – Sneaky Hope Works to Save Ted, Winds Up a Hostage 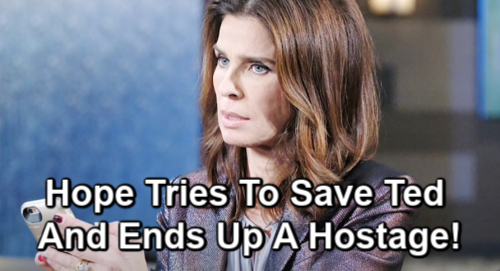 Days of Our Lives (DOOL) spoilers tease that Hope Brady (Kristian Alfonso) will have some questions for Xander Cook (Paul Telfer). When she saw Sarah Brady (Linsey Godfrey) wearing the necklace Xander gave her, Hope instantly recognized it as the one Ted Laurent (Gilles Marini) offered. Sarah tried to present some alternate explanations, but Hope can tell she’s on the right track here.

Since Sarah doesn’t know anything other than it was Xander’s gift, Hope will have to turn to Xander himself for answers. Naturally, he’s not going to be very forthcoming.

During the week of July 8-12, Days of Our Lives spoilers say Hope will interrogate Xander anyway. She may realize she’s not going to get the truth, but she could at least hope to trip Xander up or spot any signs of uneasiness.

Hope will rely on her excellent detective skills and strong intuition. Xander’s reaction to her grilling should confirm there’s more to the story. Hope will keep digging with a little help from Eli Grant (Lamon Archey) later. Days spoilers say they’ll uncover some other clues, so it won’t be long until the puzzle comes together.

Hope may not get any hints about Holly Jonas’ (Harlow and Scarlett Mallory) survival or Kristen DiMera’s (Stacy Haiduk) involvement, but she’ll be convinced Xander’s behind Ted’s disappearance.

She may figure out that Ted was trying to send her a message through that necklace. On July 12, Days of Our Lives spoilers say Hope will ultimately follow Xander and count on him to lead her to Ted.

Kristen DiMera May Decide To Do Away With Hostages Herself

Xander will indeed be on his way to the secret room in the DiMera tunnels. Unfortunately, Hope’s snooping could put her in a dangerous situation. In that same DOOL episode, “Nicole Walker” (Arianne Zucker) will unmask herself as Kristen to Ted and Kate Roberts (Lauren Koslow). Will Hope find the three of them together? Could she end up becoming a hostage herself?

That’s a possibility since Hope will be so close to situation. This hostage crisis could spiral out of control! They can’t put the entire town in that tiny room, so Kristen and Xander will need a new plan. Kristen won’t be happy that Xander lied about killing the pests, so she may decide to do away with them herself. Of course, her efforts would have to be thwarted somehow.

No matter how this plays out, it sounds like Hope will be in a tight spot! We’ll give you updates as other Days news comes in. Stay tuned to DOOL and don’t forget to check CDL often for the latest Days of Our Lives spoilers, updates and news.