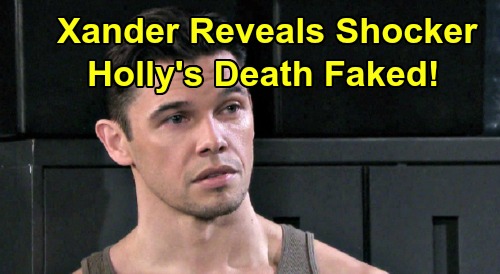 Days of Our Lives (DOOL) spoilers tease that Xander Cook (Paul Telfer) will face serious backlash. His partnership with Kristen DiMera (Stacy Haiduk) will come back to bite him, so he’ll have to deal with an angry mother her equally livid daughter. Of course, we’re talking about Maggie Kiriakis (Suzanne Rogers) and Sarah Horton (Linsey Godfrey).

During the week of August 19-23, the walls will close in on “Nicole DiMera” (Arianne Zucker). It’ll build to Kristen’s stunning exposure at John Black (Drake Hogestyn) and Marlena Evans’ (Deidre Hall) anniversary party. That’ll naturally lead to drama for Tony DiMera (Thaao Penghlis), but let’s focus on Xander for right now. He’ll definitely have to answer for all the lies he’s been spreading.

Maggie has formed a quirky friendship with Xander. She’s understandably struggled to trust him, but she’s seen his softer side and knows there’s good in there somewhere. However, Maggie will soon wonder if she’s completely misjudged the situation. She’ll view Xander’s deception as a horrible betrayal, so their pal status will be out the window for a while.

As for Sarah, Days of Our Lives spoilers say her rage will crush smitten Xander. Sarah will rip into Xander alongside her mom during the week of August 26-30. DOOL fans can expect Xander to apologize and try to explain, but there won’t be much he can do. Xander got in too deep with Kristen, so he’ll have to take the criticism.

The good news is Xander knows something that could bring happy reunions and warm many hearts. The bad news is revealing it could bring more trouble. Holly Jonas (Harlow and Scarlett Mallory) is alive and well, so that’s something Maggie and Sarah deserve to hear.

Since Kristen will use Holly to bargain with the Salem PD, Xander should just go ahead and spill. It’d be better to come clean than for Sarah and Maggie to get updates elsewhere. Days of Our Lives spoilers say Xander will insist it was all a ruse. Holly’s death was faked, so the kid’s doing just fine in a safe, loving home. A floored Eric Brady (Greg Vaughan) will ultimately join in this conversation, too.

The shocker will bring skepticism from Eric, Sarah and Maggie, but Xander will assure them it’s true. He may even be instrumental in getting the cops to believe it. That could be significant since Kristen will try to cut a deal in exchange for Holly’s location. Days spoilers state that Holly’s future is riding on what happens next!

It sounds like some exciting scenes are coming up. We’ll keep you posted as other Days details emerge. Stay tuned to DOOL and don’t forget to check CDL often for the latest Days of Our Lives spoilers, updates and news.