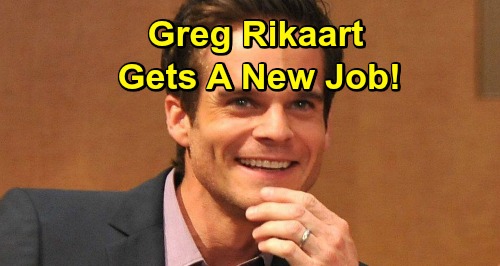 The Young and the Restless (Y&R) alum and Days of Our Lives star Greg Rikaart book a new prime-time role. The handsome young actor will play Dr. Will on an upcoming episode of ABC’s Modern Family. It sounds like this gig won’t interfere with his Days role as Leo Stark.

Greg, who is best known as Kevin Fisher on Young and the Restless was written off the show after 17 years last year. He moved out of state with Chloe Mitchell (Elizabeth Hendrickson) and their daughter, Chloe.

Rikaart has spoken out on how he was pushed off the soap opera. He assured his followers on social media that he didn’t want to exit as he loved stepping into Kevin’s shoes every day. There is no word on when Kevin will pop in to Genoa City.

As for Leo Stark on Days of Our Lives, the DOOL fans are loving his evil ways. This is a role that Greg has wanted to play for many years—a gay man. For years he begged Y&R to write him a gay storyline, but they refused. They didn’t think the fans were ready to embrace a gay couple.

Greg has said over and over that he is happy with his DAYS role. With Judith Chapman on the set, he said it feels like home.

Rikaart posted to Instagram, announcing his new role on Modern Family. He captioned the picture, “After all the comas I’ve been in, it’s nice to be on this side of the bed. Thanks for all the insanely lovely and warm welcome.”

Greg did not reveal when his episode will air or what his storyline will be. He will disclose more details about his appearance when he knows the date of his episode.

Don’t forget to come to come back to Celebrity Dirty Laundry for more spoilers, news, and casting updates!

After all the comas I’ve been in it’s nice to be on this side of the bed. Thanks for the insanely lovely and warm welcome @abcmodernfam!