BY Heather Hughes on February 9, 2019 | Comments: one comment
Related : Soap Opera, Spoiler, Television, The Young and the Restless 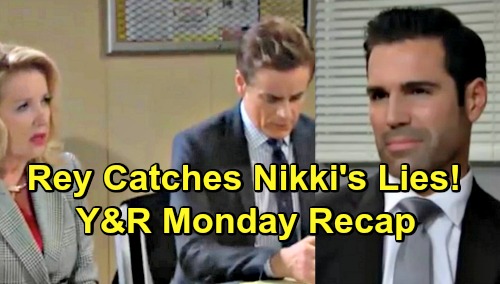 The Young and the Restless (Y&R) spoilers for Monday, February 11, tease that Victor Newman (Eric Braeden) will beg Nikki Newman (Melody Thomas Scott) to keep quiet. He’ll realize what she’s about to do and desperate try to stop it. Nick Newman (Joshua Morrow) and Victoria Newman (Amelia Heinle) will be equally concerned, but they won’t be able to prevent Nikki’s confession.

Nikki will tell Rey Rosales (Jordi Vilasuso) and Christine Williams (Lauralee Bell) that she’s the one who killed J.T. Hellstrom (Thad Luckinbill). They’ll wonder if Nikki’s being honest or just doing this to protect Victor. Either way, they’ll know Nikki has to be taken in for questioning. Victor will be left on house arrest until they can sort through the facts of the case.

At the police station, Nikki will give an altered version of the story. She’ll claim J.T. climbed out the window that night, so she followed him to Chancellor Park. Nikki will argue that she grabbed the fireplace poker to use as protection. She’ll claim J.T. threatened to murder Victor and take out the rest of the Newmans, too.

Nikki will lie that she smacked J.T. when he lunged at her and killed him. Since the hole was ready and waiting, Nikki will suggest that she simply pushed J.T. in there and buried him. Rey won’t get why Nikki wouldn’t just go to the cops about J.T.’s threats. However, she’ll contend that logic doesn’t come into play when you’re protecting your kids. You just think first and act later.

After Nick and Victoria arrive, they’ll be kept away from Nikki. Rey will announce that he wants to grill Victoria and see if her story lines up with her mom’s. Victoria will insist that Nikki’s making this up to save Victor from prison. She’ll maintain that Victor was in a hospital bed when all this went down, but Rey will remind Victoria that they haven’t confirmed exactly when J.T. was murdered.

Rey will also want to know about the fireplace in Victoria’s bedroom, so she’ll note it hasn’t been used in forever. Later, Y&R spoilers say Rey will make a promise to Nikki and Michael Baldwin (Christian LeBlanc). He’ll feel confident that others were involved in J.T.’s murder, so he’ll plan to prove it.

Over with Kyle Abbott (Michael Mealor), he’ll tell his dad about his problems with Lola Rosales (Sasha Calle). Kyle will worry that they’re splitting, but Jack Abbott (Peter Bergman) will offer advice. He’ll think Valentine’s Day is the perfect time to patch things up, but Kyle won’t be so sure. He’ll point out that Lola doesn’t like it when he spends too much money on her.

Jack won’t think Kyle has to be a big spender to make it special. He’ll think Kyle should plan a cabin getaway, but Kyle will suggest that could be an issue, too. Lola is a virgin, so Kyle would have to show her it wasn’t about wanting sex. Jack will bring up some good ideas – like a modest dinner, some hanging lights and a sleigh ride. Kyle will decide it’s a solid plan, so he’ll decide to deliver an invitation.

At Devon Hamilton’s (Bryton James) penthouse, Fenmore “Fen” Baldwin (Zach Tinker) will apologize to Ana Hamilton (Loren Lott). She’ll snap that she’s not the one in charge, so she won’t decide whether Fen gets another shot. He’ll feel bad about ignoring her texts and missing his chance at the showcase, but he’ll hope he can make this right.

Fen will head to the coffeehouse afterward and share his career worries with Summer. They’ll confess that they were simply using each other to stir up some jealousy for Lola and Kyle. Once Devon appears, Summer will lie that it’s her fault Fen was late. She’ll fib that Fen was a huge help during a recent crisis. At Ana’s urging, Devon will decide to give Fen another chance, but it’ll be his last!

Other Young and the Restless spoilers say Summer will spot Kyle waiting for Lola. She’ll touch his hand as they chat and wonder if Kyle’s really getting what he needs. Naturally, Lola will notice their closeness when she walks in.

After Kyle gives Lola his cabin invite, she’ll argue that she can’t just bail on restaurant prep. Kyle will feel like Lola refuses to make time for him, so she’ll think maybe they should just part ways. Once Lola and Kyle leave, Summer will grab the cabin invitation and look thoughtful.