BY Heather Hughes on February 8, 2019 | Comments: one comment
Related : Soap Opera, Spoiler, Television, The Young and the Restless 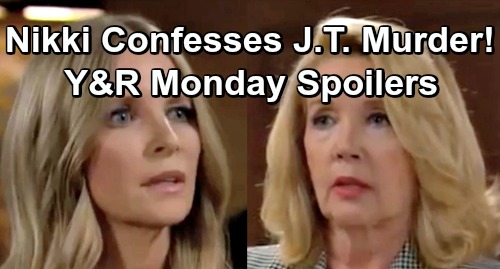 The Young and the Restless (Y&R) spoilers for Monday, February 11, tease that Nikki Newman (Melody Thomas Scott) will make a bold move. She’ll decide to do what she should’ve done a long time ago and confess to the cops. Rey Rosales (Jordi Vilasuso) will listen closely as Nikki gives her statement. Christine Williams (Lauralee Bell) will also be on hand to consider Nikki’s shocker and react accordingly.

Of course, Nikki will give a censored version of the story. She won’t tell the whole truth about the night J.T. Hellstrom (Thad Luckinbill) died, but she’ll spill enough to hopefully clear Victor Newman (Eric Braeden) of murder charges.

This could be tricky since Nikki won’t want any backlash for Victoria Newman (Amelia Heinle). However, Nikki may think any jury would be sympathetic to Victoria the abuse victim.

Victoria admitted the abuse to her therapist, so there’s a record of it. Since J.T. tried to kill Victor, it’s not hard to believe he’d get violent with Victoria anyway. These are great reasons why Nikki and the others should’ve just come clean in the first place!

Nevertheless, what’s done is done. They can’t undo their many months of silence, so Nikki will just have to provide an altered story and hope it sticks.

It looks like Nikki will keep Sharon Newman (Sharon Case) and Phyllis Summers (Gina Tognoni) out of this. They made a pact, so Y&R spoilers say Nikki won’t want to break it. Sharon needs to be there for Faith Newman (Alyvia Alyn Lind) and like it or not, Phyllis is dating Nick. It would break his heart to watch both Sharon and Phyllis land behind bars.

Nikki won’t want to cause any more pain than she has to, so she’ll take full responsibility. Naturally, Christine and Rey may suspect that she’s leaving a few things out. While they grill Nikki, Victor will try to contain the damage. This is sure to become an even bigger media spectacle once Nikki makes her admission.

Nikki’s stopping Victor’s trial to confess to killing J.T. herself! This is a reporter’s dream, especially since it involves one of the most influential families in Genoa City. The Young and the Restless spoilers say Nikki’s actions will bring quite a mess, so stay tuned to watch the drama heat up.