BY Sean O'Brien on February 7, 2019 | Comments: one comment
Related : Soap Opera, Spoiler, Television, The Young and the Restless 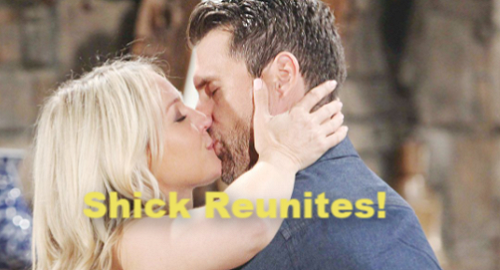 The Young and the Restless (Y&R)  spoilers tease that Nick (Joshua Morrow) and Sharon (Sharon Case) are becoming close again. Never fully sliced since their marriage ended during the mid part of the last decade, the tumultuous J.T. (Thad Luckinbill) situation has created numerous points of needed contact between the one-time Shick and now, another opportunity to bond and then to fully renew their love.

The odds of Shick reuniting might never be better if Phyllis (Gina Tognoni) proves to be behind Victor’s (Eric Braden) murder frame. However, the fans of one of Y&R’s most beloved back-in-the-day couples know that the likelihood of Miss Summers actually being revealed as the villain in this ongoing mystery storyline is slim.

In order for Phyllis to be the total villain, she would have not only framed Victor but has also been torturing Nikki (Melody Thomas Scott) for months. How could both be possible when Phyllis knows that she was fully involved in not reporting J.T.’s accidental death and then led his unlawful burial?

The horrid Marco (Peter Bergman in a masterful dual role) incident scarred Phyllis. The recent appearance of an email with a doctored digital recording could be her own doing. If not, Phyllis’ repressed desire for revenge could lead her to provide information to Rey (Jordi Vilasuso) intended to sabotage Victor’s freedom.

Niktor would instantly rat Phyllis out to the authorities, which would serve to set up her own arrest and likely conviction. So unless Tognoni’s alter ego is guilty and then also leaves Genoa City in a hurry, she’d be primed for major jail time.

But Sharon doesn’t necessarily need Phyllis to have done all of the above in order for Nick to break his reborn Phick tie. All Morrow’s often emotionally embattled character needs to learn is that Phyllis is trying to sink one, or both of his parents right now.

Phyllis has openly stated on many occasions that all coverup crew members have to look out for themselves. That clearly indicates at least Victor will be made to look bad if Phyllis thinks she can use current opportunities to apply justice in retrospect.

Nick’s defense of Phyllis in recent weeks appeared to reinforce the notion that Y&R has opted to not only keep Phick going but make this pairing stronger. However, executive producer and head writer Mal Young’s departure means that his final episodes will play out soon.

So, TPTB, who has recently taken over at Y&R, can surely write Nick away from Phyllis and toward Sharon. The drama surrounding J.T.’s apparent death and soon-to-be-revealed arc finale also provides another chance for Shick to bond and maybe even, finally, remarry.