The Young and the Restless Spoilers: Thursday, August 30 – Rey Grabs His Gun for a Shocker at Sharon’s – Kyle Sets Billy’s Trap 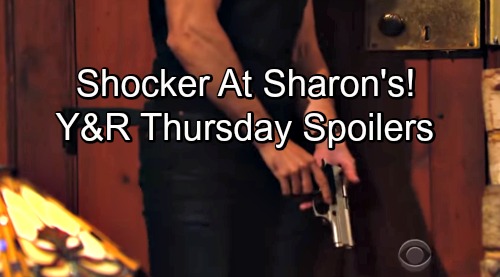 The Young and the Restless (Y&R) spoilers for Thursday, August 30, tease that Sharon (Sharon Case) will get some surprising visitors. First, it looks like Rey (Jordi Vilasuso) will pop in for a chat. He’ll have some excuse for speaking with Sharon at home, but she’ll undoubtedly grow suspicious. Thanks to Victoria’s (Amelia Heinle) concerns about Rey, the whole cover-up crew should soon be on edge.

While Rey’s there, it appears they’ll hear a startling noise. Sharon and Mariah (Camryn Grimes) will scramble over to the other side of the room while Rey grabs his gun. Fortunately, there won’t be an intruder outside. The Young and the Restless spoilers say it’s Tessa (Cait Fairbanks), but Y&R may take their time in revealing that. Perhaps it’ll be saved for a Friday bombshell.

Regardless, Mariah and Tessa have a lot to catch up on. Tessa will be distraught, so it sounds like her plan to help Crystal (Morgan Obenreder) went horribly wrong. If Crystal’s still alive, Tessa has most likely lost track of her again. The Young and the Restless buzz hints that Rey may pitch in on clearing Crystal’s name, so he should be moving beyond the J.T. (Thad Luckinbill) storyline eventually.

In the meantime, Kyle (Michael Mealor) will contemplate his future. He’s eager to toss Billy (Jason Thompson) out of the CEO spot, so he’ll work on making that happen. Kyle wants to establish a pattern of borrowing company money, which will require some sneakiness.

The Young and the Restless spoilers say Kyle will take the next step in his plot. He’ll make sure a trap’s set, so Billy could walk right into it. Ashley (Eileen Davidson) still won’t be certain this is the right strategy, but she’s all for the end result. Jabot could become an epic failure if they can’t get Billy off the throne. Whether he has Ashley’s support or not, Kyle will do his best to seal Billy’s fate on Thursday.

Of course, Kyle can be a bit of a backstabber. It’s probably a big mistake for Ashley to trust Kyle, but she’ll have to learn that lesson the hard way! We’ll give you updates as other Y&R news comes in. Stick with the CBS soap and don’t forget to check CDL often for the latest Young and the Restless spoilers, updates, and news.