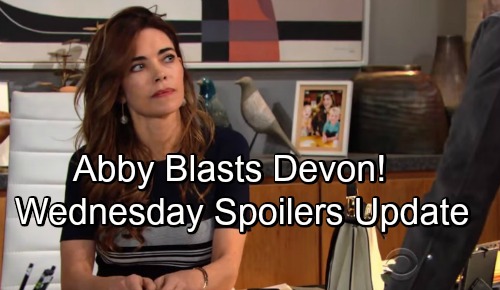 The Young and the Restless (Y&R) spoilers update for Wednesday, August 29, tease that Phyllis (Gina Tognoni) will handle a tricky situation. When she runs into Sharon (Sharon Case) at Crimson Lights, they’ll discuss Summer (Hunter King) as well as Nick’s (Joshua Morrow) impersonation of J.T. (Thad Luckinbill). Phyllis will let it slip that Nick told her himself, so Sharon will wonder when he spilled.

Of course, Phyllis won’t share that it was just before she slept Sharon’s fiancé! Instead, she’ll cover that she met with Nick to talk about Summer. Phyllis will fib that she doesn’t remember when it all went down. Sharon and Phyllis will eventually shift gears. Y&R spoilers say they’ll be worried about Victoria’s (Amelia Heinle) rising stress level. She could blab if they can’t get a grip on her soon.

Meanwhile, Rey (Jordi Vilasuso) will corner Victoria and introduce himself. He’ll admit that he saw her online, so he already knows who she is. Afterward, Rey will gaze at a picture he took of Victoria. He’ll undoubtedly hope he can get her to crack sooner or later.

The Young and the Restless spoilers say Victoria will arrive for a meeting with Victor (Eric Braeden). Her father won’t be pleased by her tardiness, but she’ll insist that she’s been busy dealing with Newman drama. They’ll spar, but Nikki (Melody Thomas Scott) will convince Victor to patch things up.

Vic will urge Victoria to have dinner with him along with Abby (Melissa Ordway). He’ll hope he can bring the family together again, but Victoria’s secret will remain in the back of her mind. Naturally, Nikki won’t give up on helping her daughter. She’ll reach out again, but Victoria will push her to butt out.

Other Young and the Restless spoilers say Abby will track down Devon (Bryton James). She’ll be upset over his bitter attitude and the toll it’s taking on Lily (Christel Khalil). Abby will contend that the maximum sentence won’t bring Hilary (Mishael Morgan) and the baby back, but Devon will stand his ground.

Afterward, Nate (Brooks Darnell) will try his luck. He’ll hint that Devon hasn’t thought about the consequences of his decision. Nate won’t believe Devon’s ready to face Charlie (Noah Alexander Gerry) and Mattie’s (Lexie Stevenson) reactions. They’ll be devastated if Lily goes to prison for 20 years, so Devon had better think long and hard before he seeks true revenge.

Back with Abby, she’ll join some of the Newmans at the athletic club. Abby and Victoria will make amends before Rey shows up. He’ll talk about being Arturo’s (Jason Canela) brother, so Victor will press for more info about why Rey’s in Genoa City. Rey will suggest that his financial services job brought him to town.

Later, Victor will pump Abby for Rey details while Nikki and Victoria argue in the distance. Once Vic brings up Dark Horse, Abby will confess that things are going well. She’ll assure her father that he’s not going to pry any secrets out of her. Victor will just want Abby to know that the door’s always open at Newman Enterprises.

When Victor spots Devon, he’ll approach him and state that he’s sorry about Hilary. Devon will reflect on Lily’s actions and how petty they were. The Young and the Restless spoilers say Victor will defend the crash as a mistake, but he’ll understand Devon’s forgiveness issues. Vic will suggest that only Devon can decide what he’s willing to move past.

At the coffeehouse, Rey will speak with Sharon and Phyllis briefly. When Victoria and Nikki arrive, they’ll realize Rey’s sought them all out. Abby will walk in and mention that Rey was asking about J.T. (Thad Luckinbill), so that’ll send up some red flags for Victoria. Once she’s alone with the cover-up crew, Victoria will contend that Rey poses a threat.

It sounds like Rey’s closing in on the truth, so Nikki and the gang will have to be careful. We’ll give you updates as other Y&R news comes in. Stay tuned to the CBS soap and don’t forget to check CDL often for the latest Young and the Restless spoilers, updates, and news.