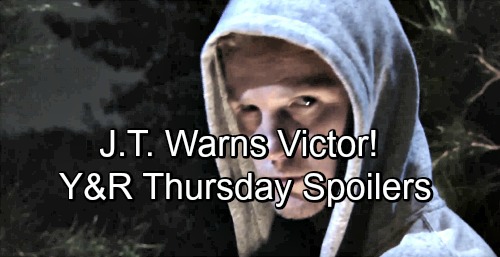 The Young and the Restless (Y&R) spoilers for Thursday, July 12, tease that Mariah (Camryn Grimes) will need some guidance. Kyle’s (Michael Mealor) become a confidant lately, so it seems he’ll be the one she turns to. He’ll do whatever he can to support Mariah and put her on the right track.

Mariah will mull over her lackluster love life and seek Kyle’s perspective. Not much has been happening since her breakup with Devon (Bryton James) and all the Tessa (Cait Fairbanks) drama. Perhaps Mariah’s been holding herself back from moving on. It’s clear that she still has feelings for Tessa, so part of her may think a romance is still possible.

Kyle will get Mariah to admit her lingering love, so that’ll be step one of his sneaky plan. The Young and the Restless spoilers say Kyle will have a chat with Tessa as well. It’s easy to see where this is going! Kyle will push Tessa to talk about her own feelings for Mariah. He’ll do his best to play Cupid and bring them together as a couple.

Mariah and Tessa will make admissions to Kyle, but what about to each other? These scenes could set up some emotional moments, so stay tuned for what’s in store. Meanwhile, Neil (Kristoff St. John) will also have romance on his mind. He’ll catch Ashley (Eileen Davidson) off guard with a candlelight dinner for two. Neil will really go all out with flowers and some fancy-schmancy cooking.

Ashley will confess that she’s a bit surprised, but she won’t shy away from the idea. She’s single, so there’s no reason she shouldn’t go for it. The Young and the Restless spoilers say Neil has a big evening planned. He’ll suggest that they should leave business at the door and just focus on connecting. They’ll do just that with a flirty conversation and a steamy lip lock.

Other Y&R spoilers say Victor (Eric Braeden) will get a mysterious message. It looks like he’ll be warned about a major showdown. Victor will realize J.T.’s (Thad Luckinbill) coming for him, so he’ll vow to be ready. He’ll refuse to let J.T. walk all over him this time.