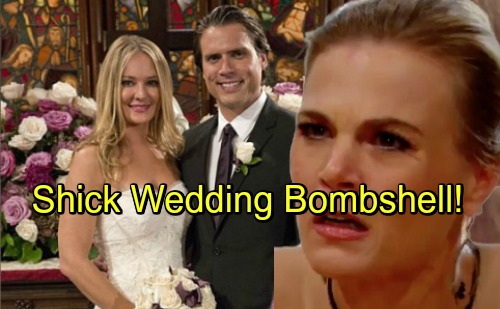 The Young and the Restless (Y&R) spoilers tease that Nick (Joshua Morrow) and Sharon (Sharon Case) will face growing problems this fall. Their wedding is rapidly approaching, but that’ll only make them more nervous about what they’re hiding. Y&R fans know that both Sharon and Nick are keeping huge secrets. They’ll worry about what might happen if the truth gets out.

Nick will be determined to keep his own secret under wraps. He realizes it would devastate Sharon if she knew he slept with Phyllis (Gina Tognoni). Nick thought his engagement was over at the time, but he really should’ve checked with his fiancée first.

Besides, the hookup took place the same night Nick found Sharon’s ring unattended. What kind of man has sex with his ex immediately after an assumed split? Not a great one! Nick understands that Sharon would have every right to call off the wedding. He’ll work hard to make sure she doesn’t hear this scandalous story, but that’ll become more difficult soon.

The Young and the Restless spoilers say the secret circle will widen. Someone else will find out about Phyllis and Nick’s night of passion. There’s a good chance Summer (Hunter King) will be to blame. Whether she tells Billy (Jason Thompson) or another Y&R character, spreading this news will be incredibly dangerous. Nick will fear that his whole world’s going to fall apart.

However, Sharon isn’t completely innocent either. She didn’t betray Nick in the bedroom, but she’s still deceiving him. Sharon took part in the cover-up of J.T.’s (Thad Luckinbill) stunning death. Nick went through an elaborate impersonation scheme and still has no idea that J.T.’s buried in the park. He’d be furious if he knew Sharon was holding out on him.

Nevertheless, Sharon will wonder if she should get married with this hanging over them. She’ll consider coming clean, which could present an interesting dilemma. Would Nick actually be understanding since he’s hiding a far more painful shocker?

That’s a possibility, but Nick tends to be a bit self-righteous. He might lash out over Sharon’s confession and make things worse for himself when his own secret eventually comes out. Nick’s a hypocrite, so he’ll probably prove it.

Sooner or later, The Young and the Restless spoilers say “Shick” will explode. Will it happen at their impending nuptials? It’s been a while since we had a derailed wedding, so let’s hope so! We’ll give you updates as other Y&R details emerge. Stay tuned to the CBS soap and don’t forget to check CDL often for the latest Young and the Restless spoilers, updates, and news.