BY Heather Hughes on June 16, 2018 | Comments: one comment
Related : Soap Opera, Spoiler, Television, The Young and the Restless 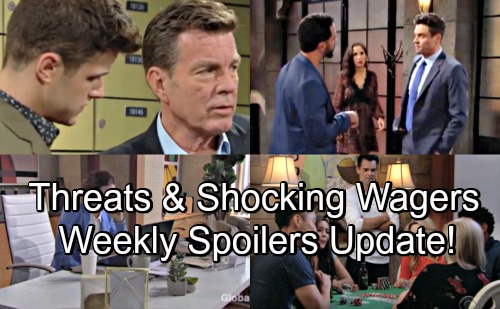 The Young and the Restless (Y&R) spoilers update for the week of June 18-22 tease that several Genoa City residents will face surprises. Some will be pleasant and others will be downright terrifying! First, let’s talk about Nick’s (Joshua Morrow) shocking request. He’ll ask Sharon to marry him, so that’ll certainly catch her off guard.

However, it looks like Nick will talk Sharon into it. The Young and the Restless spoilers say they’ll have a big announcement to make soon. A celebration is looming, so it makes sense that Sharon and Nick will spread their engagement news.

Meanwhile, Abby (Melissa Ordway) will worry about Arturo’s (Jason Canela) smooth moves. He’s just a little too slick with the ladies – particularly the ones in Abby’s family. After Abby notices Arturo dancing with Ashley (Eileen Davidson), Nikki (Melody Thomas Scott) will plant seeds of doubt. She’ll want Abby to believe Arturo’s got his sights set on her mom.

Later, Abby will pump the brakes on this romance. She’ll likely lash out over Arturo and Ashley’s connection, but he should suggest she’s got it all wrong. Arturo may argue that he just wanted to charm Ash and earn her approval. He won’t see the big deal, so Abby will have to decide what she believes.

Other Y&R spoilers say Summer (Hunter King) will convince Billy (Jason Thompson) to play poker. He’ll be reluctant thanks to his past gambling addiction, but Summer will promise that his secret would be safe. After Bill gives in and plays a few hands, he’ll realize he’s made a mistake. Billy’s letting himself get drawn deeper and deeper into Summer’s web.

At Newman Enterprises, Victoria (Amelia Heinle) will face a stunning threat. A distorted voice will be featured in an email attachment. The person who sent it will allude to Victoria’s secrets and fill her with fear. Victoria will fear that this could tie in with J.T. (Thad Luckinbill) and stir up trouble. She’ll be right, but there’ll be a bit of a twist.

The Young and the Restless spoilers say an unsettling delivery will arrive. There’ll be boxes full of confidential files, which J.T. had access to. Victoria will worry that J.T. could somehow be alive, but perhaps she needs to worry about someone else instead. J.T. seems truly dead and buried, so who could be sending this info and what else does he or she know?

Deadly secrets could still be in jeopardy! We’ll give you updates as other Y&R details emerge. Stay tuned to the CBS soap and don’t forget to check CDL often for the latest Young and the Restless spoilers, updates, and news.