The Young and the Restless Spoilers Next 2 Weeks: Nikki’s Confession and Arrest – Rey and Sharon’s Dangerous Spark Ignites 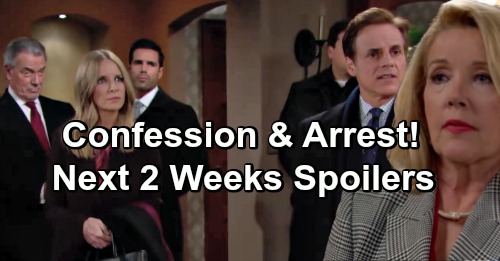 The Young and the Restless (Y&R) spoilers for the next two weeks tease that some tense battles are on the way. During the week of February 4-8, Sharon Newman (Sharon Case) will have to pick a side. It sounds like Nikki Newman (Melody Thomas Scott), Victoria Newman (Amelia Heinle) and Phyllis Summers (Gina Tognoni) will all be sparring again.

Sharon will get caught in the middle of the war, so she won’t be able to remain neutral. The other ladies will force her to choose, so we’ll see which side Sharon ends up on. The Newmans aren’t trustworthy, but neither is Phyllis. There are just no good options here.

Meanwhile, Devon Hamilton (Bryton James) will give Ana Hamilton (Loren Lott) a nudge into the limelight. He’ll think she could be a shining star for the streaming label. Devon knows Ana is against the idea of putting herself out there, but he’ll think she’ll change her mind with a slight push.

Of course, Ana will most likely be furious about this. She’s hiding something about her past that could come back to bite her. If Ana draws too much attention, it could probably spell disaster. Devon will begin to wonder what other secrets Ana might be keeping, so it may not be long until he learns the whole truth.

Other Young and the Restless spoilers say Mariah Copeland (Camryn Grimes) and Tessa Porter (Cait Fairbanks) will celebrate some great news. Tessa’s had employment issues for a while now, so maybe a new job will be the reason for their celebration.

Regardless, Mariah and Tessa will enjoy a night on the town with Lola Rosales (Sasha Calle) and Kyle Abbott (Michael Mealor). Too bad their double date will go awry!

As usual, Summer Newman (Hunter King) will stir the pot. At some point this week, Summer will spill the beans about Kyle’s recent photoshoot. Since Lola seems determined to pick at Kyle over every little thing, she’ll have a problem with it. Who really knows why? Kyle was just helping out Lauren Baldwin (Tracey E. Bregman) with a work project, not doing a striptease for Summer.

Nevertheless, Lola will end up walking out on Kyle. Summer will hope she just scored an advantage, but Kyle will lash out in a big way. On the bright side, it could lead to a charged moment. There’s a thin line between love and hate, so Summer will try to straddle it.

Back with Nikki, guilt and fear will drive her to make a shocking decision. It looks like she’ll make a confession to Christine Williams (Lauralee Bell) and Rey Rosales (Jordi Vilasuso). During the week of February 11-15, Nikki will face the consequences. The Young and the Restless spoilers say Nikki’s choice will lead to more conflict for the rest of the girls’ night gang.

Over with Rey and Sharon, their spark will become dangerous. Will they be able to avoid such overwhelming temptation? They might for now, but this is getting awfully tough to ignore. Summer will also rev up the temptation for Kyle, so things are bound to get risky.

Y&R fans will also see Cane Ashby (Daniel Goddard) work toward restoration. He’ll hope to repair some of the damage to his marriage, but Lily Ashby (Christel Khalil) may not be ready to hear him out. It may be a while before Lily can even think about getting this relationship back on track.