BY Sean O'Brien on February 1, 2019 | Comments: one comment
Related : Soap Opera, Spoiler, Television, The Young and the Restless 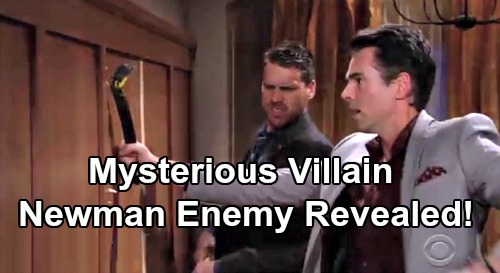 The Young and the Restless spoilers tease that ‘Villy’s’ recent fight on The Young and the Restless will lead to at least a temporary reconciliation. Vickie (Amelia Heinle) and Billy’s (Jason Thompson) make up will result through a time of crisis, of which there haven been many in past years. But ‘Villy’ often puts differences aside where their children’s lives are concerned.

Y&R viewers don’t yet know who the mysterious intruder is, which assumes that the person who’s been keeping the Newman family under surveillance isn’t a staff member at the Ranch. With whatever is eventually revealed, the deep connection that Vickie and Billy share is revived through Katie’s (Sienna Mercuri) disappearance.

Mercuri’s now chatty character has been talking about an invisible friend of late. Understandably seen as the rantings of a creative child’s mind, Katie told her grandfather that this individual can’t be seen by anyone but her.

While they had been moving toward what both parties thought was a chance at true couple’s revival, Vickie’s multiple smooches with Cane (Daniel Goddard) fully served to stop Villy from developing. After Billy learned about Vane and, like the audience, was confounded, Vickie quickly turned the situation around to her being the victim.

Billy’s decision to tell Lily (Christel Khalil) about Cane’s behavior was a mistake, both in butting into Lane’s business and also in giving Vickie the ability to shift focus from what she had done. However, their latest petty relationship squabble pales in comparison to Katie’s disappearance.

This situation now rightly becomes Villy’s full focus until a hopeful resolution happens. Whether Vickie’s cling to Billy is only temporary, or has the potential to make both people admit that they should try to be together again remains to be seen in Genoa City.

This scary storyline angle could move in varied directions from here. A true whirlybird, like Ian Ward (played by the superb character actor, Ray Wise), would seem prime for a return. Kidnapping is part of his resume, with this bent skill being one that he could smoothly employ as part of a manipulative scheme.

Y&R fans haven’t been given enough information to know if this recently revealed, but still to be identified villain, is actually connected to J.T. Hellstrom (Thad Luckinbill). Someone like Ian, or another character with some Newman-based grudge, could simply be manipulating whatever information was somehow gleaned about the end of Mr. Hellstrom’s life.

Even if Nikki’s (Melody Thomas Scott) tormentor and the person who framed Victor Newman (Eric Braeden) are the same human being, that won’t necessarily mean that this criminal has been reacting because of what happened to J.T. It could be that the existence of that situation is merely serving as a manipulating jumping off point.