The Young and the Restless Spoilers: Week of February 4 – Email Proof Victor’s a Murderer – Nikki Confesses To Rey and Christina 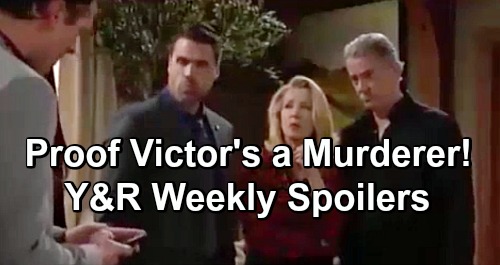 The Young and the Restless (Y&R) spoilers for the week of February 4-8 tease that we’ll see some strong temptation and dangerous moves. For starters, Summer Newman (Hunter King) will change her tune with Kyle Abbott (Michael Mealor). She’s been talking a good game about maturity and boundaries, but Y&R fans can see right through her act. Summer clearly wants Kyle back ASAP.

Of course, Kyle’s in love with Lola Rosales (Sasha Calle) and intends to wait until she’s ready to have sex. Summer will corner Kyle and suggest that she doesn’t think that’s fair to him. She’ll contend that a relationship is about meeting the needs of both people, not just one. Summer will be more than willing to meet Kyle’s needs, but he’ll shut her down. He won’t want to wreck his caring, solid romance.

However, you can bet Kyle will need a cold shower afterward. This won’t be the last Kyle hears from Summer, so how long will it be until the temptation’s too much to bear? Will Kyle eventually cheat on Lola? Time will tell, but Summer will certainly put some work into her latest mission.

Other Young and the Restless spoilers say Abby Newman (Melissa Ordway) will make an effort with Mia Rosales (Noemi Gonzalez). She’ll do her best to play nice, so Mia will agree to do the same. Still, you can never really trust that what you see is what you get with Mia. She’s usually plotting under the surface, so that may be the case this time, too.

Mia and Abby will toast to finding out what makes each other tick. They may do just that, but there’s a good chance they’ll exploit each other’s weaknesses when they find out! The Young and the Restless spoilers at least point to more shadiness for Mia.

At the police station, Sharon Newman (Sharon Case) will mull over a shocking email. It’ll involve proof that Victor Newman (Eric Braeden) is a murderer, so this will add to the cover-up crew’s woes. Nikki Newman (Melody Thomas Scott) will really be feeling the heat by the end of the week. It looks like she’ll make a risky decision that could have serious consequences.

The Young and the Restless spoilers say Rey Rosales (Jordi Vilasuso) and Christine Williams (Lauralee Bell) will show up at the ranch. Nikki will pipe up that there isn’t going to be a trial today. She’ll let Christine and Rey know that she’s got something to tell them.

It’s possible this will be a fake-out, but the latest info points to one cover-up crew member making a life-changing choice. That could line up with Nikki coming forward to the cops! We’ll give you updates as other Y&R news comes in. Stay tuned to the CBS soap and don’t forget to check CDL often for the latest Young and the Restless spoilers, updates, and news.