The Young and the Restless Spoilers: Mia Calls Out Arturo’s Name While Making Love To Rey – Crushed Hubby Runs To Sharon 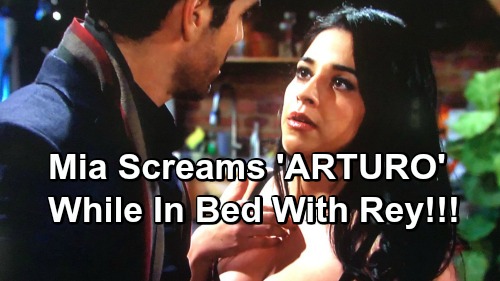 The Young and the Restless (Y&R) spoilers tease that Mia Rosales’ (Noemi Gonzalez) blunder will set off a shocking chain reaction. She won’t cheat with Arturo Rosales (Jason Canela), but her mistake will seem just as bad in the heat of the moment.

During a steamy sex session with Rey Rosales (Jordi Vilasuso), Mia will get pretty vocal. Unfortunately, it won’t be Rey’s name that she calls out! Mia will send echoes of Arturo Rosales’ (Jason Canela) name through their apartment instead, so Rey will completely lose it.

He’ll blast Mia for apparently fantasizing about his brother while they made love. Rey will jump out of bed, grab his clothes and head for the door. Despite Mia’s desperate attempts to explain away her utterance, Rey will walk out on her and dash off to see someone else.

Naturally, that someone will be Sharon Newman (Sharon Case). Rey’s been trying to convince himself that working things out with Mia was for the best. However, it’s clear that he’s been pining for Sharon. She’s been doing the same thing, but Rey will insist they don’t have to anymore.

The Young and the Restless spoilers say Rey will declare his love for Sharon and ask for a future with her. Sharon will be taken aback by Rey’s abrupt change of heart. She’ll invite him into the cottage and push for a long conversation about what’s next.

Sharon may be worried if she learns what prompted this decision. She won’t want Rey to get involved with her for the wrong reasons, but Rey will undoubtedly argue that he’s been denying his true feelings.

Rey felt obligated to fix his marriage to Mia, but her latest mistake will make him see the light. He’ll assure Sharon that he’s all in on a relationship with her, so she’ll be thrilled.

Sharon will ultimately say “I love you” back to Rey, so they’ll finally get serious about what’s between them. Alas, it’ll soon be Sharon’s turn to make an error of her own.

Rey hasn’t been the brightest detective throughout this case, but he’ll be smart for once. He’ll start putting the clues together and demand some answers about something really shocking he sees at the cottage. Y&R spoilers say Rey will put Sharon on the hot seat, so there’s a good chance she’ll crack under the pressure on next week’s new Y&R episodes, February 11-15.