BY Marcy Cohen on February 7, 2019 | Comments: one comment
Related : Soap Opera, Spoiler, Television, The Young and the Restless 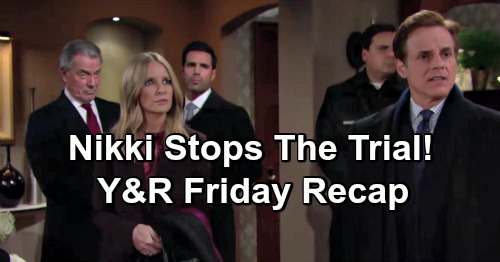 The Young and the Restless (Y&R) spoilers for Friday, February 8, tease that Victor Newman’s (Eric Braeden) trial will be a hot topic. At the athletic club, Michael Baldwin (Christian LeBlanc) will watch as a news anchor (Nischelle Turner) covers the latest Newman drama. Victoria Newman (Amelia Heinle) will also watch nervously at home. She’ll undoubtedly worry about the consequences for Victor.

At the ranch, Victor will shut off the news report and turn his attention to Nikki. She’ll hate that Victor’s stuck in this nightmare because of her. Victor will offer reassurance and point out that it’s his turn to offer protection – just like Nikki protected Victoria that fateful night.

Over with Rey Rosales (Jordi Vilasuso) and Mia Rosales (Noemi Gonzalez), they’ll discuss Victor’s transfer to the courtroom. Rey will be part of the police escort since Victor’s a flight risk.

He’ll get a call from Christine Williams (Lauralee Bell), who wants to be involved. Rey and Mia will also reflect on some warm memories. He’ll know Mia won’t hurt him again since they could never come back from that.

Meanwhile, Sharon Newman (Sharon Case) will fret about Victor potentially going down for this. Mariah Copeland (Camryn Grimes) won’t want Sharon to do anything crazy – like throwing her life away by confessing. Soon after, Nick will summon Sharon for a meeting and Mariah will tag along.

At Nick’s place, he’ll fret to Phyllis Summers (Gina Tognoni) about the recording and all the chaos it adds. Nick will note that the person targeting his family knows what Victor’s incarceration would do to Nikki. It would destroy her, especially since she has the power to free him.

Later, Sharon will propose a plan during Nick’s big meeting. She’ll insist there’s no guarantee the tormentor will stop just because Victor goes down. Sharon will think it’s time to stand up to this guy and eliminate his power. She’ll feel like jury would have sympathy for Nikki if they came forward as eyewitnesses to what happened.

Phyllis and Mariah won’t like the sound of that. They’ll warn that the facts could get messy and land the whole cover-up crew behind bars. Y&R spoilers say Nick will agree and decide they just can’t do it.

He’ll refuse to add to Nikki’s stress level and put her health in jeopardy. Once this conversation wraps up, Phyllis will watch a news reporter (Suzanne Marquez) covering the trial outside the courthouse.

Over with Abby Newman (Melissa Ordway), she’ll try to shift the media’s focus. Abby will push Arturo Rosales (Jason Canela) to get some engagement pictures made with her. She’ll suggest that everyone loves a good wedding, so highlighting the Newman nuptials could help Victor.

Abby will run into Mia at the coffeehouse briefly, which will bring some annoying moments. However, Abby will put Mia out of her mind and deal with other matters. The Young and the Restless spoilers say she’ll eventually head to the courthouse with Arturo by her side.

Back at the ranch, Nick will determine that Victor doesn’t have high hopes about the trial’s outcome. Victor will want Nick to look out for the family, especially Abby since she’s about to marry a smooth operator. Finally, Rey and Christine will show up to transport Victor to the courthouse. Once Nikki sees the handcuffs on her husband, she just won’t be able to take it anymore.

The Young and the Restless spoilers say Nikki will pipe up that there’s not going to be a trial today. She’ll reveal that she has something to share, so it looks like an admission of guilt is looming. We’ll give you updates as other Y&R details emerge. Stay tuned to the CBS soap and don’t forget to check CDL often for the latest Young and the Restless spoilers, updates, and news.