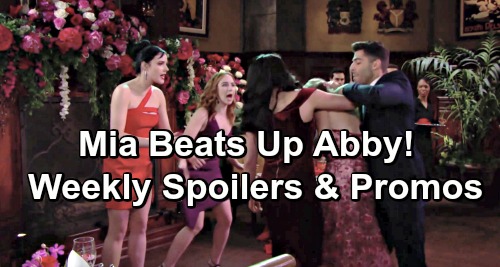 The Young and the Restless (Y&R) spoilers for the Valentine’s week preview of February 11-15 tease that we’ll see some romantic shakeups and some serious drama. Of course, there’ll be a few happy couples on this amorous holiday as well. Nick Newman (Joshua Morrow) will manage to put his family drama on hold to have some fun with Phyllis Summers (Gina Tognoni). They’ll heat things up in the bedroom and take a break from all the J.T. Hellstrom (Thad Luckinbill) chaos.

Abby Newman (Melissa Ordway) and Arturo Rosales (Jason Canela) will also make some romantic plans while Mia Rosales (Noemi Gonzalez) focuses on her hubby – or at least tries to! After Mia utters Arturo’s name during a moment of passion, Rey Rosales (Jordi Vilasuso) will barely be able to believe his ears. He’ll confront Mia about who she’s really thinking about they make love before he storms out.

That’ll leave Mia to drown her sorrows and fret over how she can’t have two men. She’ll expect Rey ran straight to Sharon Newman’s (Sharon Case) house and she’ll be exactly right. The Young and the Restless spoilers say Rey will hold nothing back as he professes his love to Sharon. She’ll look positively giddy as she tells Rey she loves him, too.

Unfortunately, an old phone bill will put this new romance at risk. Rey will realize a 911 call was made the night J.T. went missing. He’ll realize Sharon’s been lying to him, so he’ll wonder who she’s protecting. Y&R fans know Sharon’s hiding the truth to protect her own involvement, but she’s also doing it for Victoria Newman (Amelia Heinle), Nikki Newman (Melody Thomas Scott) and Phyllis.

Since Nikki will already have given a different version of events by then, Sharon won’t be sure how to handle this. She’ll hate to make a bigger mess with a different story, but she’ll crack under Rey’s pressure anyway. On the bright side, Rey will be more inclined to believe Sharon’s side of all this. He knows and trusts her, so this discovery could actually work in the cover-up crew’s favor.

Back with Mia, she’ll make a public scene by making a play for Arturo and attacking and yanking Abby’s hair at the GCAC. After Mariah Copeland (Camryn Grimes) and Tessa Porter (Cait Fairbanks) help Arturo pull the ladies apart, they’ll realize Valentine’s Day isn’t for everybody! Perhaps some free spirits like Mia are better suited to the single life. She clearly can’t understand the concept of boundaries in a relationship.

Summer Newman (Hunter King) will also swoop in and steal the cabin getaway invitation Lola Rosales (Sasha Calle) rejects. After another fight with Kyle Abbott (Michael Mealor), Lola will suggest they should part ways. That’ll leave the door wide open for Summer to join Kyle for a cozy cabin retreat.

There’s a good chance their kiss will lead to a hookup, so there could be trouble if Lola changes her mind and apologizes! We’ll give you updates as other Young and the Restless news comes in. Stay tuned to Y&R and don’t forget to check CDL often for the latest Young and the Restless spoilers, updates, and news.