The Young and the Restless Spoilers: Summer and Abby’s Bachelorette Party Brawl Breaks Out – Mariah Breaks Up Catfight 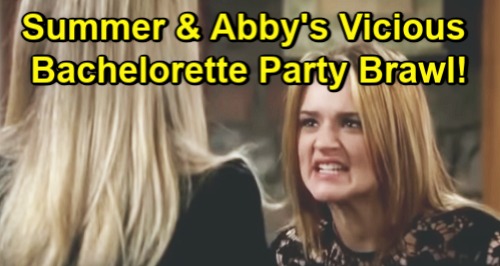 The Young and the Restless (Y&R) spoilers tease that Summer Newman (Hunter King) and Abby Newman (Melissa Ordway) will face some tension. This might tie in with the new lounge Abby’s opening up at the Grand Phoenix Hotel. Theo Vanderway’s (Tyler Johnson) been pitching in on launch party plans, and it looks like Summer will try to create some influencer opportunities for herself through this project.

Then again, it seems Lola Rosales (Sasha Calle) has a bachelorette party headed her way in the near future. That’d be another potential place for Abby and Summer to clash. Whatever the case, The Young and the Restless spoilers state that the drama’s about to heat up!

Y&R fans know Summer and Abby have a complicated history. They also have strong and sometimes bratty personalities depending on the situation. When you throw in the latest woes in their love lives, it’s easy to see why this is a disaster waiting to happen. Once Abby and Summer start pushing each other’s buttons, there’ll be no stopping them. A fierce argument will break out that leads to big trouble.

Mariah Copeland Will Play Peacemaker And Break Up Brawl

As this battle heats up, it’ll go beyond simple bickering and turn into a vicious brawl. It looks like Abby and Summer will make a very public scene at the upcoming bash. The Young and the Restless spoilers say Mariah Copeland (Camryn Grimes) will be on hand to get in the middle of the mayhem. She broke up Abby’s last public feud with Mia Rosales (Noemi Gonzalez), so it’s fitting that she’ll step in here.

Mariah will nearly be knocked down as she tries to send Abby and “Snowflake” to their corners. You can bet Mariah will take a few jabs over their outrageous behavior. Sadly, all Y&R seems to have in store for Mariah right now is getting in other people’s business.

The Young and the Restless could easily draw from Mariah and Tessa Porter’s (Cait Fairbanks) rich, messy histories to create some good storylines. Unfortunately, they chose to drop Fairbanks to recurring, which limits story possibilities. It appears we’ll just get more of Mariah the peacemaker and advice-giver with Tessa popping up occasionally.

Summer Newman May Have Worse Disaster To Contend With

Abby could also use some pizzazz in terms of her current direction. Her pairing with Nate Hastings (Sean Dominic) is a bit forced, so perhaps Y&R should think about other options. As for Summer Newman (Hunter King), she’s been trying to get over Kyle Abbott (Michael Mealor) as Theo creeps toward the dark side.

Things will get messy due to what happened in New York, so Summer may have a far worse disaster to contend with soon. She’s bound to get stuck in the aftermath since she’s involved with Theo and was previously married to Kyle. However, it’s been a while since we had a quality catfight, so it should be fun to watch Summer and Abby face off for now.

Are you “Team Summer” or “Team Abby” in this battle? Of course, you could always be on “Team Mariah” instead since she’ll apparently think they both need to grow up! We’ll give you updates as other Y&R news comes in. Stay tuned to the CBS soap and don’t forget to check CDL often for the latest Young and the Restless spoilers, updates and news.