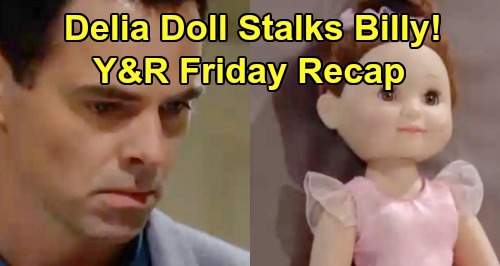 The Young and the Restless (Y&R) spoilers recap for Friday, August 2, tease that Billy Abbott (Jason Thompson) will finally sit down with a therapist. He’ll talk about his nightmares and the anger he feels toward the man who killed his daughter. After Billy describes how Adam Newman (Mark Grossman) ran over Delia Abbott (Sophie Pollono) and covered it up, the therapist will suggest he’s holding onto his grief as a way of keeping Delia alive.

This therapist will also think Billy’s using his grief to justify how much he loathes Adam. She’ll point out that although Delia’s death was horrible, it was just an accident. Adam never meant to hurt Billy’s little girl. Billy won’t want to dishonor Delia by letting go of his pain. When the therapist suggests Billy doesn’t seem to like himself, he’ll remain adamant that Adam’s the one he hates.

At Nick Newman’s (Joshua Morrow) house, he’ll fill Summer Newman (Hunter King) in on his upcoming visit with Christian Newman. Nick will also be excited about his New Hope project with Devon Hamilton (Bryton James). He’ll add that Summer’s mom, Phyllis Summers (Cynthia Watros), is working on an intriguing agenda of her own.

Other Young and the Restless spoilers say Adam will show up at Newman Enterprises. He’ll discuss the custody case with Victor Newman (Eric Braeden), who’ll think it’s time for Adam to compromise with Nick and start earning his spot in Christian’s life. Adam won’t be keen on the idea. He’ll take a jab at Victor’s health issues by suggesting he hopes his dad lives long enough to see him win.

At the coffeehouse, Sharon will talk to Victoria Newman (Amelia Heinle) about Christian, who’s been longing for his dad. The conversation will shift to Adam briefly, but Victoria will shut it down. She’ll let Sharon know she’s grateful for the help given to Billy. Victoria will point out that Billy has turned to a professional now, so Sharon will be glad to hear it.

Soon after, Adam will arrive and rant at Victoria for continuing to dodge him. He’ll mention her recent plan with Phyllis and insist she can’t keep him from Christian. Once Victoria takes off, Adam will complain to Sharon. He’ll feel like following the rules isn’t working. When Adam suggests he should tell Christian he’s his bio dad, Sharon will disagree. She’ll think Christian should just bond with Uncle Adam.

Adam will appreciate the way Sharon always talks him off the ledge. He’ll speak with her about Rey Rosales (Jordi Vilasuso) briefly before cooling off through a walk in the park. At Dark Horse, Summer will approach Phyllis and note that she heard what her mom’s been up to. She’ll wonder if Phyllis thought she’d be forgiven.

Phyllis will assume she’s getting nowhere with Summer, so she’ll thank her for stopping by. Moments later, Summer will embrace Phyllis and leave her baffled by the move. They’ll discuss how Phyllis owns being a drama queen before sharing another hug.

Afterward, Victor will track Summer down for an important conversation at Jabot. He’ll explain his rare blood disease and the treatment he’s enduring. Summer will get emotional, but at least she’ll know what Victor’s up against. In the parking garage later, Victor will struggle to keep his balance. He’ll almost collapse as he moves toward his vehicle.

When Nate Hastings (Sean Dominic) can’t be reached, Victor will summon Jack out to help him. Once Jack gets Victor inside, he’ll take a breather in his office and wait for Nate. Victor will confess that he’s not used to the side effects of his new meds. Jack will be understanding and step out once Nate comes to check on Victor. Y&R spoilers say Nate will warn that Victor’s blood pressure is too low. He’ll insist Victor should have someone drive him from now on.

Victor will remain hopeful about the fight he’s facing. He’ll be convinced he can beat this terrible disease and conquer his issues. At the park, Nick will enjoy a visit with Christian until Adam comes over and interrupts. Adam will note that Christian’s schedule doesn’t look so busy. He’ll take some pics as proof that Victoria’s giving Nick preferential treatment.

Once Victoria and Christian dash off, Nick will lash out at Adam for being a sociopath. Adam obviously won’t agree, so their shouting match will heat up. Nick will snarl that he’s going to destroy Adam. He’ll make sure Adam has nothing and no one left – especially not Christian and Connor Newman (soon-to-be Judah Mackey). The Young and the Restless spoilers say Adam will be ready for the game.

Finally, Billy will return home to a disturbing sight. He’ll notice Delia’s doll is in his bed, so that should leave him rattled all over again. It sounds like another hot episode’s coming up. We’ll give you updates as other Y&R news emerges. Stay tuned to the CBS soap and don’t forget to check CDL often for the latest Young and the Restless spoilers, updates and news.