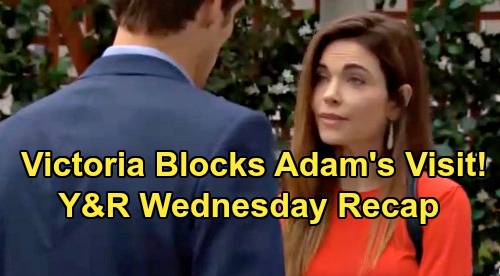 The Young and the Restless (Y&R) spoilers recap for Wednesday, July 31, tease that Jack Abbott (Peter Bergman) will give Adam Newman (Mark Grossman) some advice. He’ll be upset over Christian Newman being taken away from Nick Newman (Joshua Morrow), but he’ll at least want Adam to use this as a beneficial opportunity. This is Adam’s chance to form a real bond with Christian.

Jack will suspect the judge is hoping for a compromise through the current arrangement. He’ll make it clear that Adam needs to demonstrate he deserves a place in Christian’s life. Meanwhile, Victoria Newman (Amelia Heinle) will talk to Billy Abbott (Jason Thompson) about his latest issues. She’ll agree with Sharon Newman’s (Sharon Case) advice about contacting a professional.

Over with Rey Rosales (Jordi Vilasuso), he’ll decide to seek a different path. Nick will hate hearing that Adam got inside Sharon’s head once again. Rey won’t want to investigate Adam anymore thanks to his relationship developments. He’ll feel like he’s being consumed by this, so he’ll think another job is in order.

Later, Rey will run into Paul and insist he’d like to come back to the force. He’ll promise he’s learned from his mistakes, so he’ll eventually win Paul over. Y&R spoilers say Paul will reinstate Rey as a detective, but he’ll warn that there’s no room for error this time.

At Society, Michael Baldwin (Christian LeBlanc) will have a little chat with Christine Williams (Lauralee Bell). After Christine talks about how burnt out she is, Michael will hint that she could step down right now. Christine will get the picture and note that Michael wants to be the new DA. He’ll explain that he likes the idea, so Christina will vow to mull it over and get in touch with him soon.

Other Young and the Restless spoilers say Theo Vanderway (Tyler Johnson) will hope to speak with Phyllis Summers (Michelle Stafford) about her launch party plans. When Phyllis is too busy, Theo will get a bit annoyed. However, Phyllis will contend that she’s working on a deal that could change everything.

Afterward, Phyllis will fill Nick in on how his properties are being transferred back to him. She’ll hope this could be a fresh start. Nick will admit he’d rather not fight with Summer Newman’s (Hunter King) mom. He’ll note that he was hurt badly by Phyllis, but he’ll be willing to put the conflict to rest.

In the park, Adam will blast Victoria for not taking his calls about visiting Christian. He’ll think she’s dragging her feet on it, but she’ll suggest she’ll have to look at her schedule. Next, Christine and Paul will spend some time discussing her future. Paul will let Chris know he’ll support her whether she wants to step away now or wait.

At Jabot, Kyle will continue to fret over Celeste Rosales (Eva LaRue) not attending the wedding. He’ll confide in Jack and worry this won’t be the nuptials of Lola Rosales’ (Sasha Calle) dreams. Jack will do his best to calm Kyle’s panic before Billy arrives. Once Jack’s alone with Billy, Phyllis will appear and announce she’s got an offer to make. She’ll be willing to sell them the Jaboutique properties.

Jack will have concerns since Adam didn’t bring it up earlier. The Young and the Restless spoilers say Phyllis will confess she’s leaving Adam out of the loop. Despite Jack’s lingering questions, he’ll decide the offer’s just too good to refuse. After Phyllis heads out, Jack will advise Billy on his Delia drama. He’ll point out that Billy’s daughter would want him to get the help he needs.

At Newman Enterprises, Nick will meet up with Victoria. He’ll let her know he intends to keep a few properties, but he’ll let Newman have the rest. Victoria will wonder what’s up when Nick suggests he’s getting back to his plan. He’ll hope to find himself, but he won’t divulge the details of how he’s going to do that.

Back at Dark Horse, Phyllis will be smug as she tells Adam he owns a real estate company with no real estate. She’ll point out that the Grand Phoenix Hotel is hers since it was acquired by Summertime, Inc. Adam will reveal that he pulled a fast one – the fine print explains that Phyllis actually owns a hotel schedule for demolition in Detroit.

Adam will seem satisfied as he suggests Phyllis can keep her new penthouse. She’ll vow to wipe the smirk off Adam’s face, so we’ll see what Phyllis has in store next! In the meantime, Kyle will reluctantly meet with Theo at Society. He’ll gripe since he already told Theo he was dead to him. Theo will suggest Kyle might want to rethink that, which Kyle will view as a threat.