The Young and the Restless Spoilers: Tuesday, May 14 Recap – Adam Has a Secret Partner – Nick’s Threat – Summer Proves Her Loyalty

BY Heather Hughes on May 13, 2019 | Comments: 2 comments
Related : Soap Opera, Spoiler, Television, The Young and the Restless 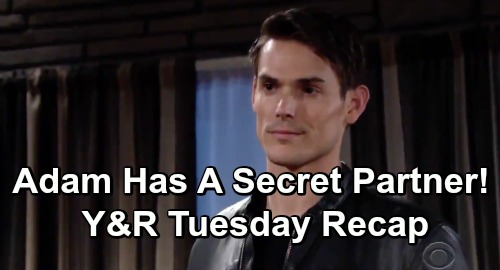 The Young and the Restless (Y&R) spoilers and recap for Tuesday, May 14, tease that Sharon Newman (Sharon Case) will have some big news. She’ll tell Nick Newman (Joshua Morrow) about her meeting with Adam Newman (Mark Grossman) and reveal that he’s back in Genoa City. Nick will warn that if Adam intends to go after Christian Newman (Jude and Ozzy McGuigen), his brother will have to go through him first.

Sharon will think Nick’s getting a little ahead of himself here. She’ll point out that Adam only agreed to stay for a week and urge Nick to keep an open mind. Meanwhile, Adam will head to Newman Enterprises with Victor Newman (Eric Braeden). Vic will be sorry he pushed Adam so hard in Las Vegas and hope things will go better in GC.

Unfortunately, Adam’s memory won’t be jogged by the company tour. He’ll head off with Victor to reunite with Nick, which will obviously bring some tension. The Young and the Restless spoilers say Vic will leave Adam to talk with Nick alone. Adam will promise he’s not there to cause problems. Nick will decide to give him a chance, but he’ll insist that he won’t let Adam harm his family ever again.

At the tack house, Adam will get settled in and hear about Sharon living nearby in the cottage. He’ll wonder what Victor expects to happen if his memories return. Victor will simply suggest that he’s missed his son and would like to work together soon. After Vic exits, Sharon will pop in. She’ll support Adam, who’ll feel like Sharon’s his only real friend right now.

At Sharon’s place, Adam will join her and look surprised like he remembers something. Sharon will question Adam, but he’ll assure her there’s been no memory flood. Adam will eventually offer his gratitude for Sharon’s kindness and head back to the tack house. After stashing a bag of cash in the bar area, Adam will text someone about everything going smoothly in Genoa City.

Over with Victor, he’ll encourage Victoria Newman (Amelia Heinle) and Nikki Newman (Melody Thomas Scott) to let Adam prove himself. Once Nikki has a moment alone with Victor, she’ll express concern about the chaos Adam’s return could cause. Back at Nick’s house, he’ll admit Adam seemed genuine when they spoke. Victoria will argue that they have to be careful around their brother the master manipulator.

Other Young and the Restless spoilers say Summer Abbott (Hunter King) will bicker with Kyle Abbott (Michael Mealor). He’ll feel like she’s trying to cause trouble in his relationship, but he’ll warn that it’s not going to work. The tension will continue when Kyle approves plans that Summer rejects, but Jack Abbott (Peter Bergman) will side with Summer and order the changes.

Later, Summer will mention Phyllis Summers’ (Gina Tognoni) little hacking adventure. She’ll note that her mom wanted to access Jabot’s files, so Jack will be thankful for Summer’s loyalty. He’ll feel like she’s proved herself at the company, which should leave Summer pleased.

At the coffeehouse, Lauren Baldwin (Tracey E. Bregman) will push Phyllis to distance herself from the Abbotts. She’ll think Phyllis needs to do something on her own, but getting this business off the ground will continue to prove difficult. Afterward, a text will come in from Jack that says, “Nice try, Phyllis.”

At Jabot, Lauren will realize Jack’s eating by himself. She’ll suggest he get back in the dating game since he does better when he’s in a relationship. Next, Phyllis will barge in and learn Jack’s text message was a warning. It sounds like Phyllis had better back off or else!

Y&R fans can also expect a picnic for Kyle and Lola Rosales (Sasha Calle). He’ll insist that he’s setting boundaries with Summer and forcing her to accept reality. Lola will be grateful for this time together, but she’ll note that she has to work late. She’ll feel like she should stay at her place tonight, but Kyle will hint that maybe they should just have one place of their own.